After we left the Japanese Tea Garden, Keith took us to another fantastic restaurant. Cousin's BBQ had been featured on Good Morning America the day before as one of the best BBQ's in the country. Voting was being done and the restaurant was to find out on Sunday the results of the voting.

This was another different experience. You took a tray, told the servers what you wanted. Then you chose 2 different side dishes, dessert if you wanted, a drink and the cashier was at the end of the counter.

Gerry had a giant baked potato with pulled pork, sour cream and chopped chives. There might have been something else on it, however, neither one of us can remember what. :)) 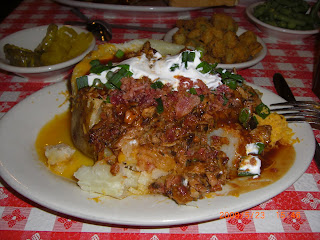 I had the pulled pork plate with Texas toast and a side of very creamy macaroni & cheese and potato salad. Yum, yum!! 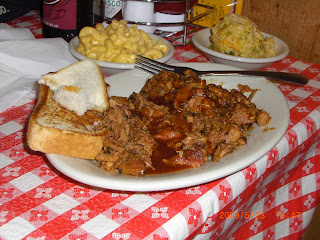 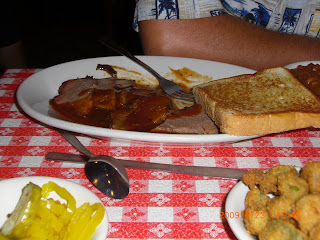 This was our 3rd Texas BBQ meal and it was just as yummy as the other two BBQ meals we enjoyed.
I am doing these posts a week later than when they occurred. Unfortunately some of the details are a bit sketchy. I had to ask Gerry what all he and Keith had to eat and he couldn't remember any of the details any more than I can. He told me I need to start taking notes. LOL!!! So Keith if you're reading this, let me know if I messed this up!! :))

Posted by Betty Townsend at 3:08 PM