Greetings from cold, foggy North Highlands, CA. After having a few sun shiny days, we are back to fog. The weather forecast says we are suppose to have some rain this weekend.

I hope Christmas Day was an enjoyble time in your house. We spent a quiet day. We did have a visit from Elizabeth, our oldest daughter and her 3 girls. Hannah and Emily did some art pieces for Gerry and I. They usually have something that they've made for us. Also had a nice chat with Denise. Stephen surprised her with a Cricut for Christmas so she was excited to start creating with it. She will be able to make some exciting things to go along with her scrapbooking.

On Thursday, Gerry talked me into going shopping with him for my Christmas gift. I wanted to stay home and bake cookies; I let him persuade me especially after he told me he really wanted me to go with him. We drove out to the Galleria in Roseville. Surprisely enough it was not that bad out there. We found a parking space right away by Nordstroms. I had no clue as what I might have wanted as a gift. We walked the entire length of the mall on both levels. By the time we got back to Nordstroms, my back was really "talking" to me so we sat down and rested for awhile. Gerry was hungry so we walked back to the food court and got some lunch. I got a fish taco from Rubio's and Gerry got something from the Japanese place that is in the food court. We were by Sears which is on the opposite end of the mall from Nordstroms. Gerry offered to go back and get the van and come pick me up. So I walked outside of Sears and waited for him.

He needed to get some more coffee from Peet's so we drove across the street from the mall to the Fountains where there is a Peet's. Again we found a parking space right in front of the store. After that we came home. There was a PGR mission out at the airport so Gerry went to that and I stayed home and baked. He had wanted to go to the Communion service at Trinity Life Center, a couple of blocks down Madison from where we live. He's been going there for church on Sundays. I didn't want to go so instead we went to The Golden Corral for dinner and then drove around to look at lights. The Golden Corral is a buffet place, this was our second time going there. The first time the food was pretty good. Neither one of us were impressed this time.

We drove all around the Arden area, Fair Oaks and Carmichael. We were going to go over to Dovewood Court in Orangevale, however the traffic waiting to get there was horrendous. The court is not very big, however every house is decorated. They have been doing this for several years. We use to go over there when Denise was still in high school which was over 20 years ago. We did get in a line of cars waiting to turn on to the street that leads to the court and then decided it would take a good hour or more so decided against it. People were parking wherever they could and walking over to the court. We drove over to Roseville and were going to drive to Rocklin to a street that has just about every house decorated. By this time I was getting pretty tired, so we turned around and headed home.

Last year there was a house in Carmichael that had music and the lights were synchronized with the music. We couldn't remember what street it was on, however driving around, Gerry figured out where it was. We found the house but they didn't have it decorated this year. We imagined there might have been some complaining by the neighbors with all the traffic, music blasting and the lights flashing off and on. It sure was pretty. The music played was by the Trans-Siberian orchestra. If you look on Youtube you will find several homes across the country that have done the same thing.

Getting back to the shopping. Gerry was taking a long time getting back to Sears to pick me up. I called him and he didn't answer his phone. So he finally appeared, he didn't say anything about why he took so long and I didn't ask him. Anyway, when I got up yesterday morning I checked my email and Facebook first then went to go make breakfast. I do not like to fix breakfast, however Christmas morning is the one day a year I will fix it. I made scrambled eggs, sausage links and with the help of "the dough boy" made some biscuits. After I cleaned up and took my shower, I came back to my office. Sitting on my laptop was a little bag from Helzberg Diamonds. And inside the bag was a tiny box which contained a beautiful pendant. It is a key, the top of it is in the shape of a heart with a pretty ruby in the center. Our birthstones are both ruby. Then below the ruby and down the key part are diamonds. When he walked back to get the van, he stopped at Helzberg's. I chided him for not knowing what to get me. It is beautiful. I tried to take a picture of it earlier so I could post it and was not having much success. Maybe I will ask Gerry to take a picture of me wearing it tomorrow. I've got sloppy clothes on now otherwise I'd ask him to do it now. :))

Last night for dinner I made a roast. I cut up some small potatoes and put them around the roast. I've always been afraid of fixing a beef roast other than pot roast. I've discovered a really easy way of doing it and it comes out so good!! I steamed some fresh yellow squash and made a fruit salad. We even used the Christmas dishes. After we were done, Gerry says to me "you didn't take pictures". It did all look pretty before we stuffed ourselves.

Friday's is a ride day for Gerry and since he didn't ride yesterday, he decided to go on the club ride today. I went to Bel Air and got a few groceries then came home and changed into some comfy clothes to lay around in. I got some country style porkribs at Bel Air and am fixing them for dinner. I just put the rice on so we will be eating very shortly.

Enjoy the last few days of 2009 and trust 2010 will bring lots of new and exciting things for you all.

Just a quick note - we are suppose to have snow in the Sacramento area sometime tonight or tomorrow. The temps are really cold and is suppose to be in the 20's tomorrow morning. It is raining now. So we shall see if the weather reports are correct! :))
Posted by Betty Townsend at 11:09 PM 2 comments:

I know, I am so bad about posting to my blog. I wanted to share the recipe with you of a dessert I made last night to take to Gerry's bike club Christmas potluck.

Layer half each of the cake, preserves, peaches and pudding mixture in 1 1/2 quart serving bowl, repeat layers.

Refrigerate several hours or until chilled.

******
This is a Kraft Foods recipe. I love their recipes, they are quick and easy. Here are some changes I make to the recipe.

The grocery store that I shop at sells the pound cake already sliced. I purchase 2 containers and use 1 whole container and 3 or 4 slices from the second one. I use 1 large can and 1 small can of peach slices that I drain really good and cut up in pieces. I like lots of fruit. I use about 1/2 to 3/4 of a jar of strawberry preserves. The last layer is the last of the pudding mixture. I smooth it over the top so the cake and fruit is completely covered. 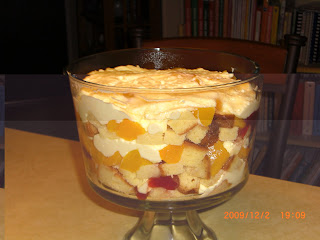