Saturday Drive of Over 200 miles

I wanted to go for a drive in the new van on Saturday. We started going west on I80 until we got to where I80 merges with Business 80 towards San Francisco. The traffic was at a standstill. We got off the freeway in West Sacramento and took the river road which goes along I5. It is a lovely drive along the Sacramento River. We followed a few older model Thunderbirds for a while then when it was safe, Gerry decided to pass them. We found out how much pep the van has, there was no trouble passing them. The river road ends in Woodland. We drove down the main street through the center of town looking for someplace to stop and have breakfast. It wasn't until we were out of town that we came upon Country Waffles. 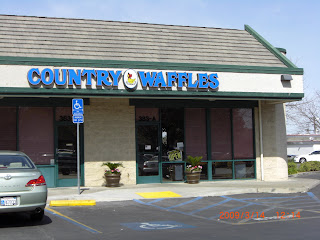 It was a very busy place. I got excited because they had crepes on the menu and I really like crepes. The breakfast I had was 2 crepes, scrambled eggs and sausage. I could have gotten the crepes with fruit if I wanted. I decided to have them plain. Well, I have to tell you, that was a huge disappointment. They were cooked too long and the edges of them were quite brown almost to the point of being burnt. Denise has a friend in North Carolina that makes the best crepes. I ate what I could of them, I won't do that again. From there we got back on Highway 16 and drove through Capay Valley. Alot of years ago we had driven through there when they were celebrating the Almond Festival. We saw signs along the way that the Festival was the next day, Sunday the 15th. The blossoms were all off the trees already. You past by the "town" of Madison first which is a 4 way stop. When we have heavy rains, this area floods a lot. Then you drive through Esparto which is a sizeable town, well, they have more than 2 streets. There is a bar there that bikers, as in Harley Davidson type bikers, like to congregate. There weren't any there on Saturday. Then it's through Guinda, Brooke; if you blink you've missed it kind of towns. Then it's past the Cache Creek Indian Casino which is now a gigantic complex, hotel, casino, the whole mega thing. The last town is Rumsey where there is a huge BBQ during the Almond Festival.

Along the way there are orchards and vineyards. A lot of the orchards looked like they weren't producing fruit. The trees were barren without any leaves, unless they leaf later in the spring. After you leave Rumsey, the highway climbs through the mountains and Highway 16 ends at Highway 20. Turning left on Highway 20 takes you to Clear Lake and the coast. Turning right takes you back to the Sacramento Valley. We turned right towards Williams and I5. We crossed I5 and headed to Colusa. Driving through here we saw more orchards and the trees were all leafed out. Don't know what kind of orchards they were as different kinds of fruits and nuts are grown in this area. Rice is also grown through here. From Colusa we drove to Yuba City where we stopped at a Starbucks so Gerry could get some coffee. He also got a couple of cookies which we ate in the car making sure that no crumbs got dropped. He gave me a bad time because there were a couple of crumbs and I didn't want them to get ground into the carpet.

Between Colusa and Yuba City, we took a cutoff and drove to the town of Sutter. There is a bike ride in April called the "Ride Around the Sutter Buttes". Gerry is thinking of doing the 100 mile ride. 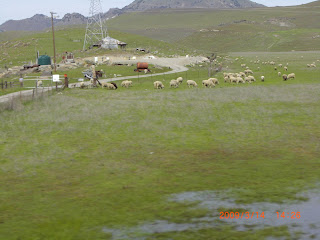 We decided to take the road that went around the Buttes to see what it was like. It was a beautiful drive. We came upon this flock of sheep grazing in this pasture. The blue in the picture are wildflowers that were scattered through out this pasture. 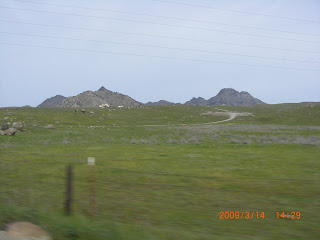 These are the Buttes in the background. The road wound around until we were really close to them. I should have been using my zoom in these pictures, I was taking them from the car as we drove so I wasn't thinking about "what I should be doing". :) 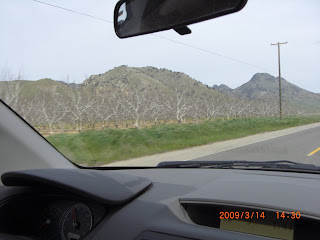 Here we are getting closer to the mountains. 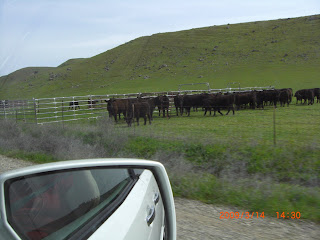 We came upon cattle, sheep and goats grazing in several different spots. Here a group of cattle were bunched together up against a fence. 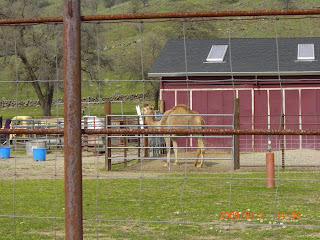 Just past the cattle we drove next to this farm and I said to Gerry "there's a camel back there". He said "are you sure?" So we turned around to go see. He thought it was a llama or alpaca but I think it's a small camel. I should have used my zoom. 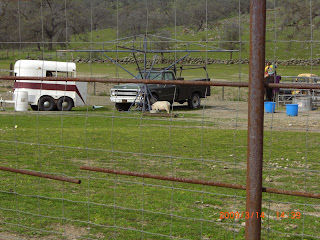 This was a pig over in the corner. Just happily eating! :) 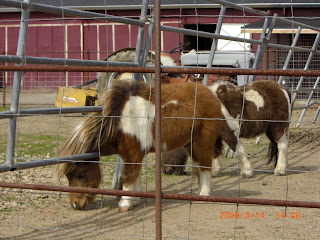 There were also several miniature horses and donkeys in this one corral and grazing in the pastures behind the barn. They are so cute! As we started to pull away, one of them was on the ground scratching it's back in the dirt. 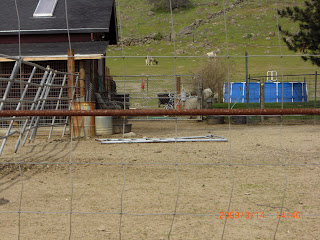 Way back there next to that blue pool was a dog that was so tall it looked like one of the miniature horses. Again, no zoom! 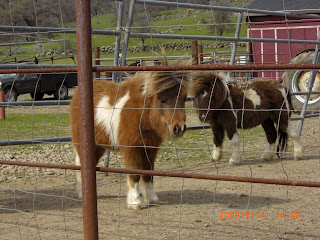 Aren't these just the cutest thing. Off in the distance there was a woman and young girl on horses. They didn't seem to be the least concerned that we had pulled up and were taking pictures. They probably get a lot of people stopping by. 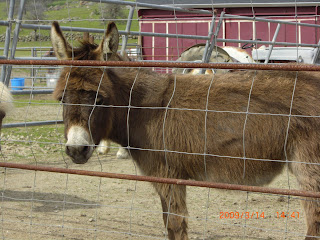 Here's a donkey. He looked right at me, and did not seem the least concerned that someone was snapping pictures of him.
Leaving here we drove into Yuba City, Marysville, then down Highway 70 to the Highway 65 cutoff, then into Lincoln and Roseville. We stopped in Roseville at Arigato's and had sushi for dinner. By this time it was almost 5 pm. We had left the house about 11 or so. All of the rolls at Arigato's are half price so we got 4 rolls and shared them, nothing really exciting, a Philly roll, Alaskan roll, Chicken Teri roll and Teka roll. The Philly roll is smoked salmon, cream cheese and avocado; the Alaskan is salmon and avocado, the Chicken teri has the chicken and avocado and the Teka roll is raw tuna. We were stuffed. It was after 6 by the time we finally got home.
All in all, a fun, relaxing day and the van did great.
Posted by Betty Townsend at 2:35 PM