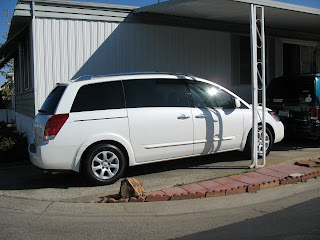 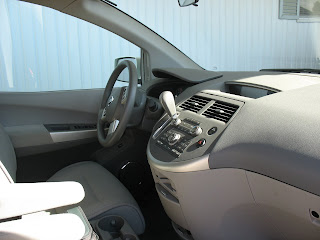 The dashboard. This is what I really liked in the Quest versus the Sienna. In the Sienna this went straight down and it was hard to reach from the passenger's seat. Everything is in easy reach here. That thing sticking up is the gear shifter. It was the same way on the Sienna except the Sienna had these grooves (and I'm probably not using the correct word here), anyway, in order to move the shifter to each position it had to go in the grooves. This one has a button on the side and you press the button in and move the shifter. The windshield wiper handle is on the steering column and several times Gerry used that instead of the shifter and the window washing fluid went everywhere, especially right after it had been washed. So that will be something to get use to.
The front has captains chairs, the driver's side only is power and it has a tilt wheel.
Other features: cruise control which is on the right side of the steering wheel. The volume control for the AM/FM radio are on the left side of the steering wheel. It has a single CD player. Rear a/c and heat controls. The side doors and rear door can be opened from inside with controls above the rear view mirror. Two storage compartments are located on the bottom of dashboard under the CD player and there's one on the left side of the steering wheel. There's compartments on each front door, lots of cup holders. Instead of a center console, there's a tray that can be folded down. There's cup holders in it too. 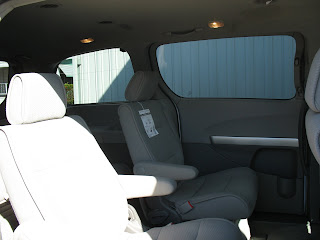 Captain's chairs in the middle. The third seat is a bench that seats 3 people. It will probably stay folded down unless we need extra seating. 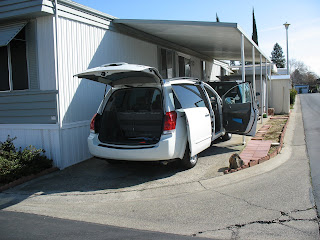 Power rear door!! Yippee!!! This was a must. These doors are so heavy and high up there. I would have struggled trying to lower it if it wasn't power. So I am very happy about this feature!! Gerry will have lots of room to take a bike on our trip. 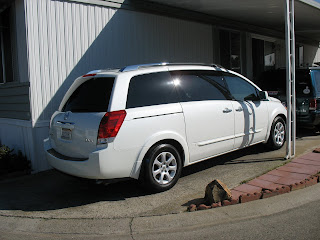 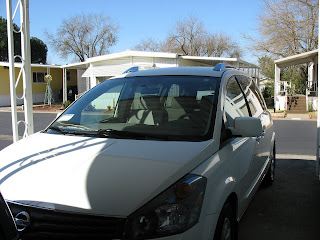 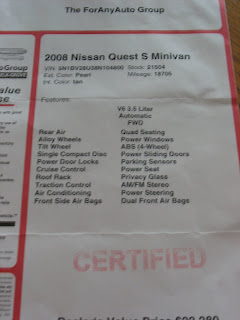 This is the sticker that was on the window. It says the interior is tan, looks more like a light gray to me. Whatever color it is, it is very clean and looks brand new.