Pot Roast is comfort food at its best. When I was growing up, more often than not, it was Sunday dinner. There usually was company for dinner after church and Dad or Mom would put a pot roast on in the oven before we went to church and it would cook slowly while we were gone. Potatoes and carrots and onion would be added to it. When you walked in the house the aroma from that roast cooking was absolutely the best.

I use to fix pot roast for Sunday dinner a lot too. Well, until I decided I preferred to go out for dinner on Sundays after church. :)

I fixed this Thursday night for dinner. It was still a little frozen when I put it on. By doing this, the meat is so tender.

I season it first with Lawry's seasoned salt and McCormick's California Style Garlic and Pepper. Before I discovered this McCormick's, I seasoned it with Lawry's, regular pepper and garlic powder. This seems to be my choice of seasonings for just about everything I fix. I'm stuck in this rut and am not very adventuresome. Some people use all kinds of seasonings. A few times I've stuffed the roast with a few pieces of garlic.

Then I brown the roast in some olive oil. After its browned on both sides, I pour some water in the pan to about half way up the side of the roast and add 2 beef bouillon cubes. Then cut up half of an onion in wedges and add that to the top of the roast before covering the pan. It cooks with a low fire for about 2 to 2 1/2 hours depending on how big it is. About half way through, I turn it over.

I check it throughout the cooking time making sure there's still enough water in the pan. Towards the end of the cooking time, I'll check it to see if it's tender. Then it's taken out of the pan and put on a cutting board while I fix the gravy. The rice is usually cooked by then and I start the vegetables. We had fresh steamed carrots with it. I have put the carrots in the roast during the last 30 minutes or so.

To make gravy, I put some flour in a small bowl and mix in some water until its the consistency I want. I bring the liquid in the pan to a boil, turn it down a little and then add the flour mixture to it and keep stirring and adding the flour mixture until the gravy is how I want it. 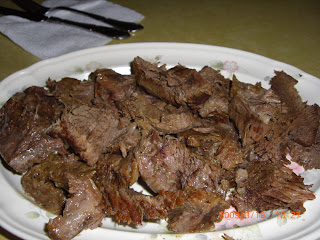 Here it is all cut up on a platter. 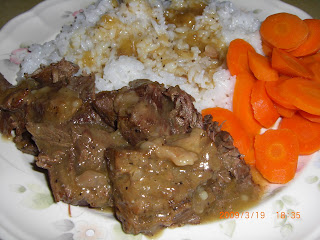 And dished up. This was so tender and absolutely so good!!
I have fixed pot roast in the crockpot too. When I do it that way, I brown the meat and season it. Put it in the preheated crock pot and sprinkle an envelope of Lipton's Onion Soup Mix on top of the roast, adding a little bit of water to just cover the bottom of the pot. It's cooked on low for 5 or 6 hours. It is so tender, it just falls apart. I'll thicken the liquid too.
I think this is the way my daughter fixes her pot roast. When I visited 2 years ago, she fixed a pot roast the night I got in. It had been cooking all day and my son-in-law was calling it a "killer" roast and it certainly was!!

Posted by Betty Townsend at 6:21 PM