Gerry had a Patriot Guard Riders mission this afternoon at McClellan Airfield. He went on his bike club ride first then came home to shower and change. I wasn't sure if I was going to go with him then decided that I would go. I am so glad I did.


This mission was to welcome a Marine home that was killed in Afghanistan a couple of weeks ago. It was a second tour for him and he actually volunteered to go back over to take the place of a Marine whose wife was expecting their first child. He left a wife and baby.


These are a few of the guys waiting for the ride captain to arrive. The man standing to the right of Gerry goes to Trinity Life Church. His wife sits a few rows in front of us. 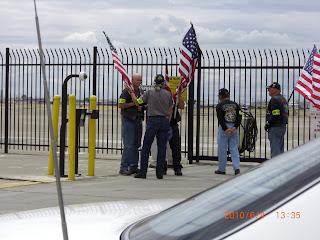 I sat in the van waiting. Gerry would walk over and let me know what was going on. When we first got there, there were just a few riders there. Then more arrived. Gerry walked over to the van and said the line of riders was across the intersection so I got out and took a picture. I couldn't even see the end of the riders. Gerry said there were probably over 100 riders there. I saw several women and at least 2 couples riding together. 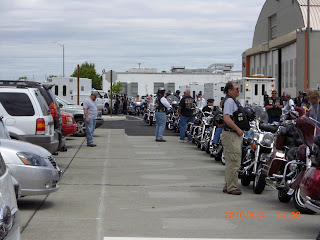 The riders starting to go onto the tarmac to await the Marine's plane and form the flag line. We waited for the bikes to get past and then got in line. There was another van in front of us and it was stopped from driving onto the tarmac. They were allowed through and then the gentleman that was waving the riders through, came up to us and said we couldn't go onto the tarmac. They wanted just the bike riders. However, we would be part of the procession going to the funeral home. Gerry was talking to some of the guys there and evidently the Marines, who were coordinating everything, did not want 4 wheel vehicles out on the tarmac. 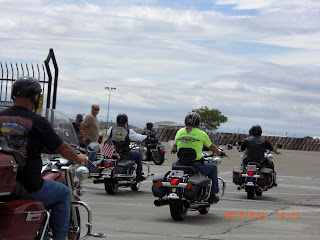 A group of assorted law enforcement, fire and civilians standing watching. Where we were parked waiting, a group of people who worked in a building next to us came outside to watch. Some were taking pictures with their phones. 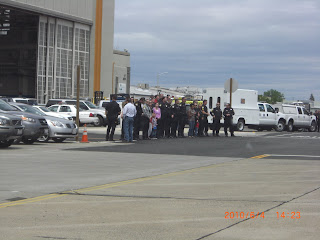 The plane has landed, the casket has been transferred to the hearse and they are coming out. Here's the first law enforcement motor escort. 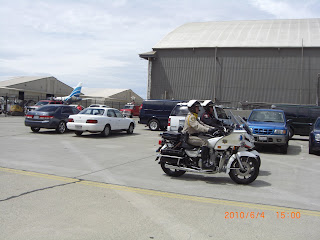 The hearse leaving the tarmac. I couldn't hold back my tears when I saw this coming. 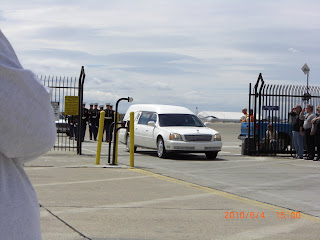 A Marine detail. Behind the detail are a group of people standing with their hands over their hearts. The lady with the blond hair, 3rd person from the right is the Head Chaplain for all of the law enforcement and fire departments in the Sacramento and surrounding area. Her husband in the gray shirt is standing to her right. He is also a Chaplain. 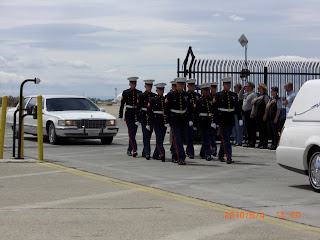 There were Corporals, E-4 and Lance Corporals, E-3 who were in this detail. They looked so sharp in their dress blues. If you enlarge this picture, you should be able to see 2 green vans behind these cars. They transported the Marines. They left soon after this to pick up the Marines in the detail and transport them to the funeral home. Gerry said that there were 2 Lance Corporals standing at parade rest by the vans during the whole time the rest of the detail was out to receive the casket. 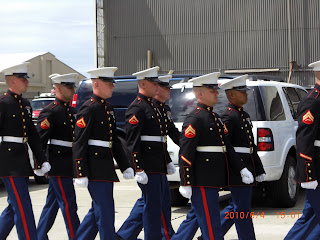 After the Marine detail passed, the family cars were next. There were 4 stretch limos with one of them being a SUV stretch limo. Then there were 2 more law enforcement motor escorts. Up ahead you may be able to see some white trucks. These were bomb squads from several locations including Sacramento, Roseville, Placer County, El Dorado County, Siskyou County and FBI. I know there were several others, just can't remember who they were. This Marine was a bomb specialist and he was killed when a bomb exploded near him. Actually I don't remember the particulars. After the bomb squads joined the lineup, the PGR fell in behind them. 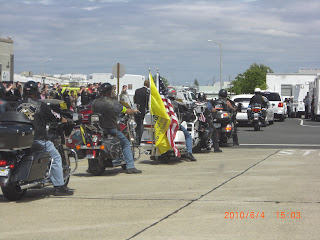 Surface streets were taken to get to the funeral home and law enforcement motor cops were used to block the intersections. Someone pulled out onto one of the streets the procession was traveling on. A pickup truck or cage as 4 wheel vehicles are called was 2 vehicles in front of us. He pulled over to the right to block the car's path. A motor cop was right there to pull the car over to the side. As we traveled down Greenback Lane approaching the overpass for I-80, I noticed this up ahead of us. Enlarge the picture to see. 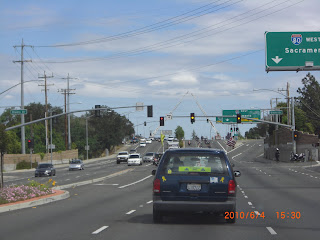 There were 2 Sacramento Metro Fire ladder trucks parked on the overpass with their ladders extended out across the street forming this arch. 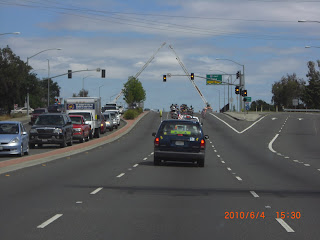 As we passed by, the fire crew were on top of the fire truck on the right side standing at attention and saluting. That was so awesome. 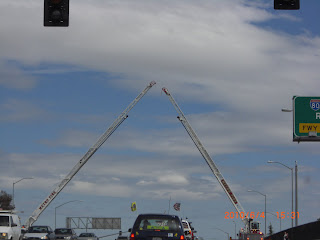 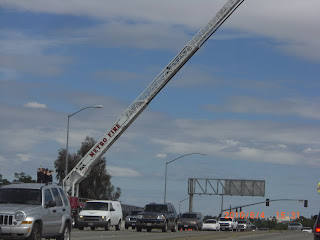 At another fire station in North Highlands, the crew had pulled their trucks out to the intersection, had all the lights flashing on their trucks and were standing at attention saluting. It was the same story at another fire station in Citrus Heights. We saw people standing out in their front yards watching. I caught a glimpse of two young men (teenagers perhaps) standing on the corner of Dewey and Greenback with their hands and arms clasped behind them, watching.
I have seen this sort of reception on television and marveled at the sight. However, to see it in person and be a small part of it, was so awesome. Denise called me while we were driving and I was able to share with her what we were seeing. Denise's son and my grandson has been a part of a couple of funerals since he's been at his duty station, the most recent one being Memorial Day.
Since I was so teary eyed when I was taking these, I wasn't sure how well the pictures would turn out. Enlarge them to get a better view.
The second part of this mission will be tomorrow at the Mormon church in Antelope. Gerry will be participating. I will be staying home. I am so glad I decided to go today, this was something I wouldn't have wanted to miss.
We have so much to be thankful for because men such as this Marine are willing to make the ultimate sacrifice of their lives so that we can enjoy the freedoms that we have. Say thank you the next time you see someone who is serving in the military. Our family is blessed to have several who have either served or are serving...Gerry (Marines), Erik (Air Force), Keith (Air Force), Bryan (Marines) and Stephen (Army) who have served; Anthony (Air Force Reserve) and Nathan (Army) now serving. Denise's father is also a Marine. We spent the first year of our marriage with him completing his tour of active duty.
Posted by Betty Townsend at 8:45 PM