Here's another recipe I found when I was cleaning up in my craft room. This recipe dates back to the '70's. It is something one of my sister's use to make. 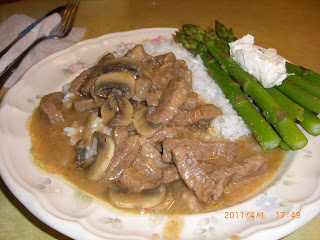 Roll the meat in the seasoned flour. Fry until brown. Add can of mushrooms, 1 1/2 cups of water and bouillon cubes. Simmer 30 minutes or until meat is tender.

That is the recipe. Now here is what I do:

I bought 2 top sirloin steaks that were cut rather thin. I cut the steaks in half and cut those halves in half again. Then I cut the halves into thin strips. I heated a fry pan with olive oil and after dredging the slices in flour, I browned the meat. I seasoned with Lawry's and Garlic pepper while the meat was browning. I added enough water to just cover the top of the meat, lowered the heat and let it simmer for about 30 minutes or so. I also added 2 beef bouillon cubes. After the 30 minutes or so, I added sliced fresh mushrooms and let it simmer for another 10 minutes or so. I did need to add a little bit more water.

Since I cut the meat in thin slices, it didn't take long to cook and the meat was very tender. I served it with rice and fresh Sacramento Delta asparagus. This is the first of the Victory Island asparagus. I like some mayonaise on my asparagus. Gerry likes it without anything on it. I use to butter the asparagus...I don't do that anymore. It was all so very yummy.

My friend Jalna takes step by step pictures of dishes that are cooked at her house. I think about doing it after the fact. :-)
Posted by Betty Townsend at 9:21 PM