I have lunch at Sushi Masa's every week or at least try to. I go either on Wednesdays or Thursdays. Since it was stormy yesterday I went today.

I started going to this restaurant back in the mid '80's. It was called Captain Teriyaki then, owned first by a young man from Taiwan. His father was the cook and they hired a Japanese lady as their waitress, Wakako Brindle (Jeanne). The son decided he wanted to go back to Taiwan and wanted his father to buy the restaurant. Henry (the father) and Wakako formed a partnership. Wakako had a friend who knew the attorney I worked for at the time and made an appointment for Wakako and Henry to come in and see the attorney. I recognized her and said to her that my husband and I ate at the restaurant sometimes. She invited us to come back. We use to go just about every weekend and I would go in during the week for lunch.

Henry then sold his interest in the restaurant to Wakako and she ran it for several years by herself. She and I developed a close friendship. She decided to sell and it was owned by 2 or 3 different parties before Masa-san bought the restaurant about 1998 or so. He changed the name to Sushi Masa.

After Wakako sold the restaurant, I started going to another restaurant in Citrus Heights called Kifune's. There I met Miyoko-san who was the waitress. I went every week on Tuesdays for lunch, always had the same thing. Sam who owned Kifune's suddenly closed Kifune's without any prior notice. Rumor was he had some serious financial problems.

So I had to find another restaurant to get my Japanese food "fix". I decided to try Sushi Masa and found Miyoko working there. Masa-san sold the restaurant in October of last year and it is now owned by an Okinawan lady. I am not sure what her name is. It took only a couple of times going before I was being spoiled by the new owner. I don't have to tell them what I want, they know what it is because I order the same thing each week. 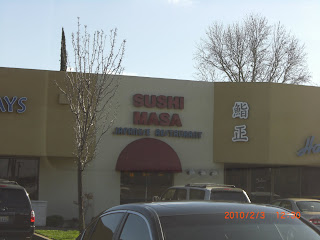 This is part of a mural that covers one wall of the restaurant. It has been on the wall since the days of Captain Teriyaki. 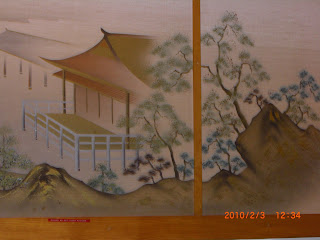 Tomiko-san, Masa-san's cook would put a salad on the plate. With the new owner you have a choice of miso soup or salad. Because I'm a regular customer, I get both. Yup, I'm spoiled. :) 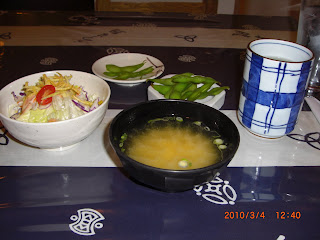 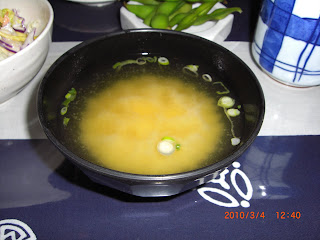 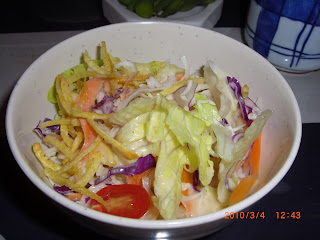 I always order Chicken Teriyaki. Tomiko-san use to fix the thighs and her sauce was lighter. The new owner uses the breast and the sauce is darker. 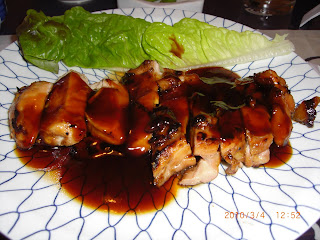 After I left the restaurant, I went to WalMart to get a few items from the Pharmacy area of the store and this - Simply Orange Juice and Simply Lemonade. I use to get the Grovestand with lots of pulp. I get the Original now. These are the best tasting, very close to making your own or maybe even better. It is over a dollar less than at Bel Air. I don't do much other grocery shopping at WalMart. I don't like their meat, fresh vegetables or fruit. I would rather pay a higher price and get better grades of meat and fresher looking vegetables and fruit. 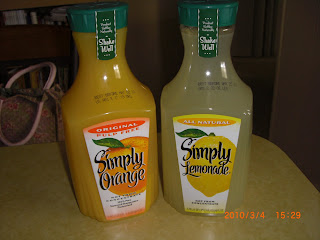 I made a meat loaf for dinner with boiled potatoes and fresh steamed asparagus. I left the skins on the potatoes, put some salt, pepper and butter on them when they were done. I added some sour cream to mine. I also like mayonaise on my asparagus. The asparagus is from Mexico. Our Sacramento Delta asparagus isn't picked until April or maybe even late March. That is the absolute best tasting asparagus. 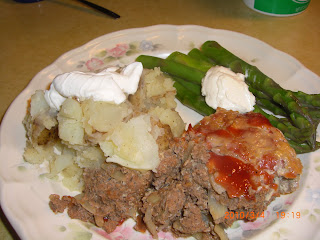 The sun was out today although there were still a lot of dark looking clouds and it was rather cold. Rain is a possibility tomorrow and through the weekend.
I got my birthday card made that I needed to do. I won't post it on my card blog until after Saturday. I'm not sure that I am all that excited about it. I may try to play it more tomorrow.
Well, I better get to bed, it is 11 pm.