Siblings and A Cousin 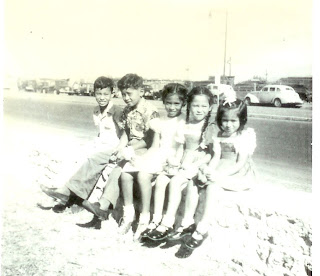 Left to right: my brother, Edwin Ernest (Eddie), our cousin Keith Kaneta, my sister Puanani Rowena (Nani), me Violet-Elizabeth (Betty) and my younger sister Ernestine Kealoha (Ernie). Another sister, Agnes Naomi (we call her Naomi) was born in December 1948 and our brother Samuel (Sam) was born in August 1950.

This was taken at Ala Moana Park (I think). The five of us were always together; usually we were lined up according to age...Keith is older than my brother Eddie...can you tell that I am fairer than my siblings?

I think I've told the story how I got my nickname "Betty"...if not, I'll tell it some other time.
Posted by Betty Townsend at 8:49 PM