Gerry told me Sunday morning that there was a Patriot Guard event in downtown Sacramento for a group of disabled veterans. They are riding bicycles across the country having started in San Francisco on Saturday. They weren't due into Sacramento until about 4pm so after having lunch, we drove into Sacramento and then West Sacramento. We ended up driving into Davis since that was a water stop for the cyclists before heading into Sacramento. We didn't see any activity at the park in Davis where they were going to be stopping so we drove a ways out of town. Not seeing any of the riders, we drove back to Davis. By that time we saw a State Farm vehicle so we parked and Gerry went to go find any Patriot Guard guys who might be there. He found a couple of guys and came back to the van to get his flag.


After I joined him we learned that the riders had taken a wrong turn and would be an hour or more later than expected. A couple of people went out to try and find them. State Farm is the secondary sponsor of this ride. It is sponsored by World T.E.A.M. Here is the link for the ride if you want to check it out. www.s2ssbikeride.org. 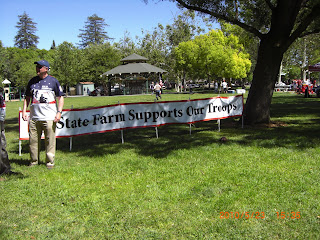 One of the support vehicles. 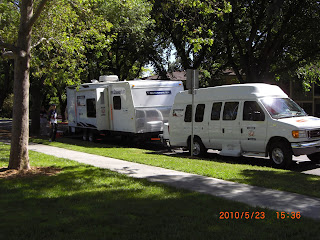 One of the riders coming in. 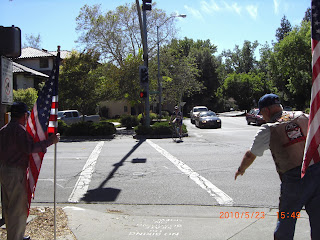 I wasn't going to add this picture then decided to do it anyway. That is the arm of Mickey, one of the Patriot Guard riders telling the rider where to go. Gerry is standing there on the left with his flag. 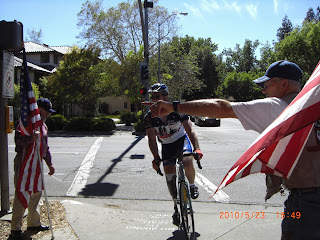 This is Brian Petras, the rider whom Mickey was directing, Mickey and Gerry. Brian had walked over to thank Mickey and Gerry for being there. The summer of 2009, Brian returned from Iraq with a cancerous tumor in his right foot, which resulted in having his lower leg amputated. He served in the Air Force. 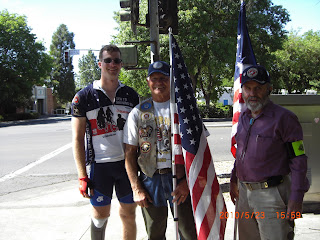 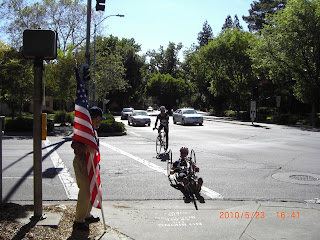 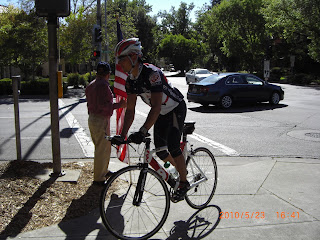 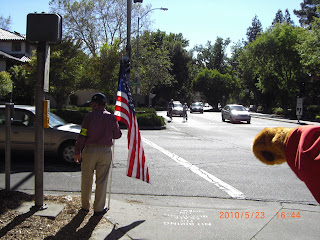 This was probably the largest group of riders to come in at the same time. 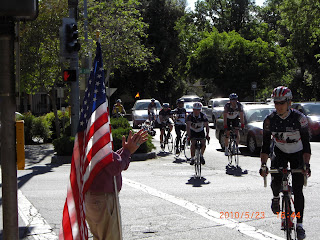 Several of the riders were riding hand cycles. 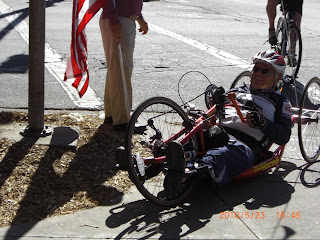 This is the corner of B Street and Russell Blvd in Davis, if you are familiar with the city of Davis. Davis is very bike friendly, it is called the Bicycle Capital. UC Davis is also located in Davis and students can be seen everywhere riding their bikes. 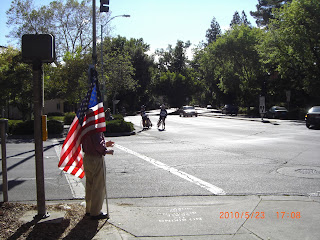 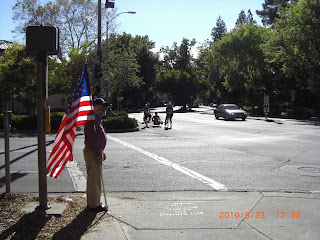 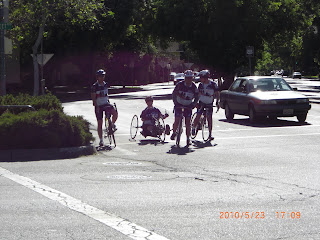 This is Nicolette Maroulis, one of two women on the ride. I'll write more about her later. 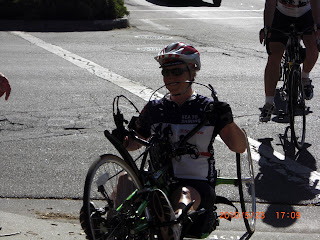 This veteran riding the hand tricycle had a serious back injury. He has to be helped on the tricycle and strapped in before he can take off. He walks with great difficulty. 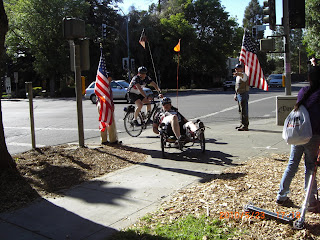 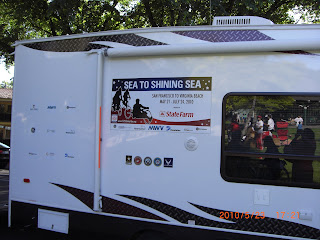 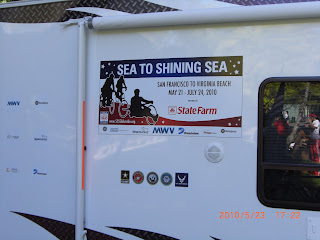 This is Nicolette arriving at Cesar Chavez park in downtown Sacramento two hours after leaving Davis. She and two other riders decided to go ahead and ride into Sacramento. The riders that arrived in Davis earlier rode into Sacramento. The rest of the riders were loaded up in the support vehicles and driven to Sacramento. Nicolette was born in Hawaii and resides now in Austin, TX. She was injured 7 years ago while serving as a K9 handler in the Navy. She spent 3 1/2 years in a wheelchair not knowing if she'd walk again. She is now able to do some walking. She is new to cycling having tried hand cycling earlier this year. She found out about this ride two months before it started and began extensive training so she could be on the team to make this cross country ride. 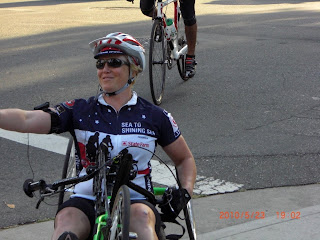 She got her bike at Mellow Johnny's Bike Shop in Austin, TX (Lance Armstrong's bike shop) and did her training through the shop. 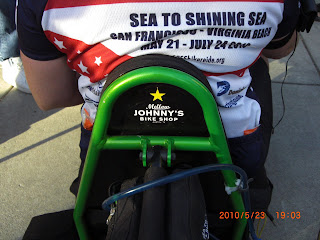 This is Sue, Jean and Eileen. Eileen's nephew, Chad Jukes, is a member of the team. Sue and Eileen are roommates and Jean is their neighbor. Jean went out to find Nicolette and the two riders with Nicolette to ride with them into Sacramento. They were the last riders to arrive. Jean is an avid cyclist. 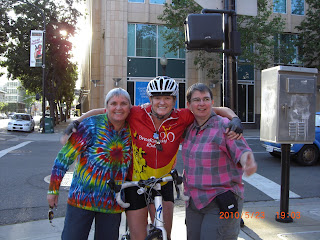 Sue, Chad Jukes, Jean and Eileen. I visited with Eileen's mom and Chad's grandmother, Polly in Davis. Polly's other daughter is Chad's mother who is from Utah. Chad was injured in December 2006 in Northern Iraq when a truck he was in struck an anti-tank mine. His heelbone and femur were broken on his right leg. He had his leg amputated below the knee 3 months after his injury and fighting MRSA. Chad is an avid climber and was back climbing within 2 months of his amputation. 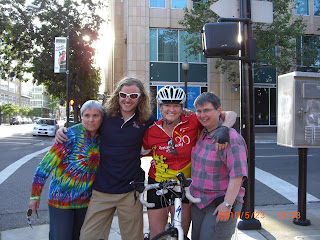 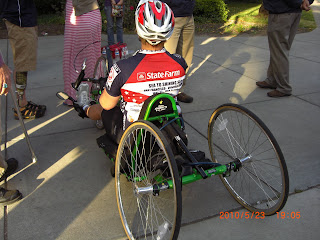 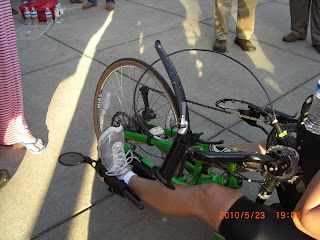 We visited with Nicolette for a little bit after she arrived in Sacramento. Gerry was very interested in her bike. There are a total of 20 riders with a few riders riding along as support. A couple of them are Paul Bremer who was an envoy to Iraq, May 2003 to June 2004. He was responsible for efforts in the rebuilding the country's shattered political and economic structure during the first year after the fall of Saddam Hussein. Also, Bob Magnus who is a retired Marine Corp General. He served as the 30th Assistant Commandant of the Marine Corp from September 2005 to July 2008. He is an avid runner and cyclist and looks forward to riding each year with wounded warriors and disabled veterans. There is a Marine Major riding along and another General who was not in the Sunday ride. These men are not disabled.
Robin Williams had dinner with the team in San Francisco the night before they left and then joined them on Sunday for some of the ride heading to Napa.
Check out their website. It was quite emotional watching these riders on Sunday. They will be traveling over 4000 miles and expect to dip the front wheels of their bikes in the Atlantic on July 24th in Virginia Beach, VA.
Posted by Betty Townsend at 2:47 PM