We usually take I-5 when we travel to Southern California. There aren't any good restaurants to stop at for breakfast along I-5. Last year Labor Day weekend we made a quick trip to San Diego for a memorial service. On the way home, we decided to drive up Highway 99 instead. We kept seeing billboards for a restaurant called Apple Annie's in Tulare which is between Fresno and Bakersfield. We decided to see what it was like since the name was interesting. Well, what we discovered was a great little restaurant and we had a great meal there.

So leaving Sacramento on Saturday we decided to take 99 and stop at Apple Annie's again. It is right off the freeway and it is easy to get back on the freeway. Here's the sign out in front. There's a Days Inn right next door. Click on the pictures to get a better view. 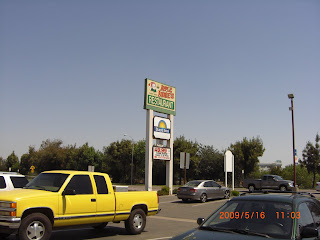 The front of the restaurant with the van parked right in front. 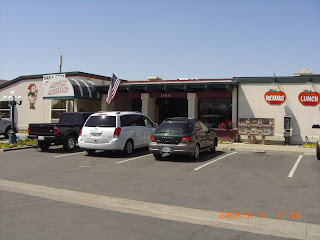 The California Aquaduct going over the mountain. 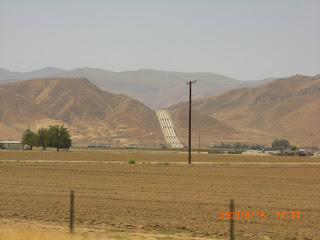 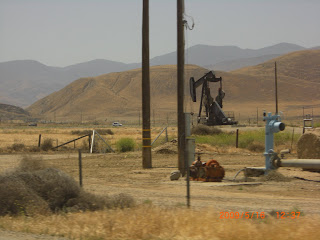 Heading up to go over the Grapevine. The summit is just over 4000 ft. 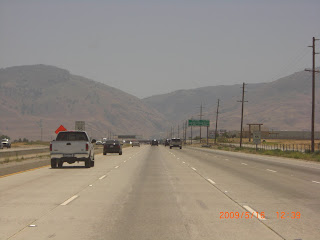 The truck scales before heading up the mountain. 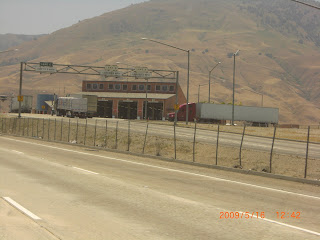 Passing through the summit area. 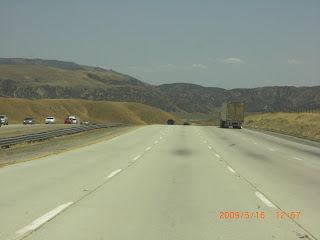 The next two pictures are of a huge lake on the right side of the interstate. A popular place for water skiing, fishing and boating. These pictures probably don't do it justice, it is a beautiful spot. 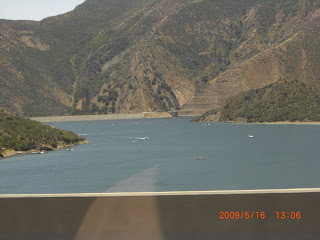 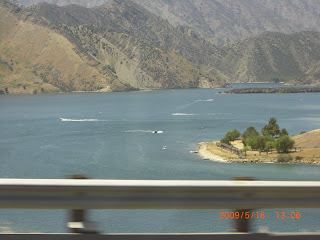 Gerry concentrating on his driving. 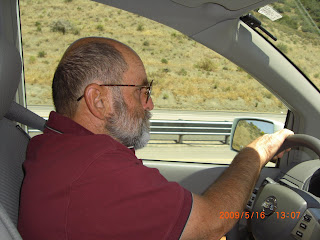 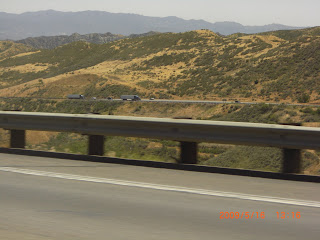 Going past Magic Mountain Amusement Park in Valencia. The park is not open yet, I believe it opens about Memorial Day weekend. Some of the various roller coasters that the park has to enjoy. 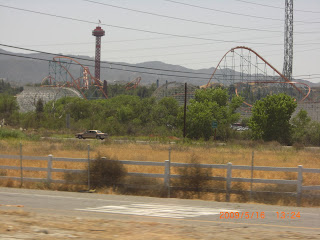 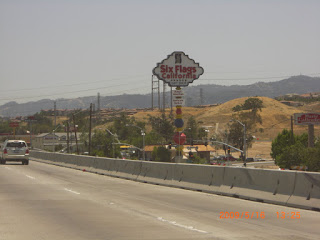 Tonight we went over to the BBQ restaurant next door to the Hotel. It's called Rudy's. I should have taken my camera with me. The food was fantastic! The meat is ordered by the pound and then all the side dishes are priced separately. Everything is placed in one of those heavy plastic cases that liter bottles of soda come in. The meat is served on pieces of butcher paper. There are long picnic type tables to sit at with huge bottles of their sauce on the tables. To wash up after eating, there is a long stainless steel trough with water spigots. We walked over to the restaurant. We brought back some peach cobbler to eat later. It's probably too late to have any now, there's always tomorrow.
It is a beautiful night here in El Paso. Our room is on the back side of the hotel and we can see the lights of the city and most likely Juarez, Mexico too. It is not that far away. Gerry's sister told us that Juarez is really dangerous now. I visited the city back in the 60's. I have a half-sister that lives in El Paso whom I haven't had any contact with for several years. Anyway, my ex and I were traveling back to Arkansas to visit his family and we stopped here in El Paso to visit because at the time, my father was staying with Marie who is his oldest daughter from his first marriage. My nieces and nephews took us over to Juarez to go shopping.
After we got back from having dinner, Gerry and I went back outside to get some pictures of the city. However, they were all blurry. It is sure is beautiful.
Gerry just brought me some peach cobbler so guess I'll eat it. It's still warm too. :))
Well, I think I am going to turn off the computer for now. Be back with more pictures to share.

Posted by Betty Townsend at 9:07 PM