I somehow forgot these pictures in my previous post. The casket was placed on that cart and pulled over to the gravesite by the PGR pallbearers and a mortuary employee. The flag carrying PGR guys were suppose to be right behind the casket, however the family got behind the casket instead. It was a little bit of an incline up this ramp and then quite a walk over to the gravesite. Some of the mourners were elderly. The widow was being helped by a couple of men. 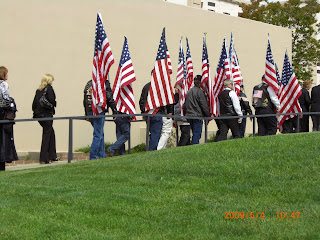 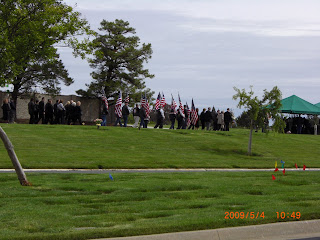 Here they are walking across in front of the Court of Honor wall to the gravesite. It was a overcast day and a little muggy. 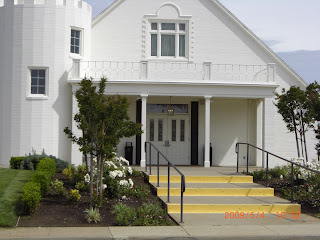 The chapel out front where the service was held. At the beginning of the service, the PGR lined the steps with their flag line. That was over with by the time I got there. After I took the pictures out front and was getting into our van to leave, I heard the rifle salute. Gerry said the guys that did it were probably Army reserve. One of our neighbors is a member of the local VFW chapter Honor Guard. He was at the service that the PGR did last week Thursday in Roseville.