After we left the Stockyards, Keith took us to a Japanese restaurant that he has gone to a time or two. Unfortunately, I didn't take any pictures there. I had a couple of really good sushi rolls, Gerry had teriyaki chicken and Keith had vegetable tempura and a California roll. The food was very good.

After we left there, we went back to the hotel and Gerry and Keith got ready to go on a bike drive. They rode up the bike trail and back for a total of about 34 miles. Gerry brought his single speed bike and Keith was on his road bike that he found on eBay. 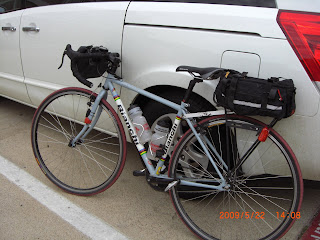 Gerry riding around the parking lot at the hotel. 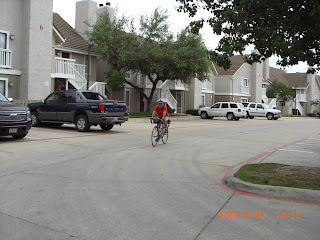 A view of the bike trail, river and park of Trinity Park. 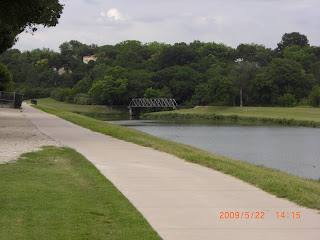 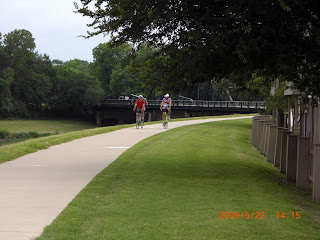 Keith is ducking his head down. :)) Remember he doesn't like his picture taken. Father and Son going off together. 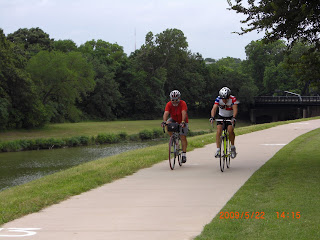 They got back from their ride rather late so we walked across the street to Panera Bread for a some dinner. Gerry and Keith had a sandwich and I had a Chicken Apple salad which was very good. I will have to remember that when we get home. We like going to Panera Bread at home for lunch.
Saturday morning, 5/23, Gerry and Keith went on another bike ride. They rode a total of 54 or so miles going up the bike trail to the end of it then taking country roads to the town of Aledo and back.
Gerry sure enjoyed the time spent with Keith riding their bikes.

Posted by Betty Townsend at 1:17 PM