Happy Mother's Day to all the Moms who read my blog. I trust you have had an awesome day and have been able to do exactly what you wanted.

We went to church this morning. In the past carnations have been given to all the moms. Being responsible for purchasing the flowers for the moms for several years in the past, what the moms got this year was a welcome change.

The young lady who has taken over the leadership of the Women's Ministry purchased these gourmet cupcakes. She works at Kaiser in Roseville and last week the nurses each received one of these cupcakes. The business is called "Icing on the Cupcake" and is located in Rocklin which is east of Roseville. There are numerous kinds. Here is the one I received. 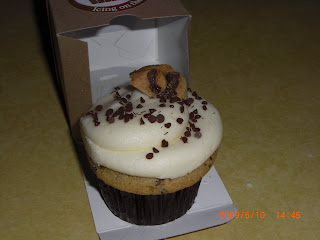 For the past few years we have gone to Cattleman's to eat on Mother's Day. It is rather expensive, however, it is the one time a year I can enjoy Rack of Lamb. And that's exactly what I had today. It is so absolutely fabulous. I know some people do not care for lamb, my husband being one of them. I absolutely love it!! I had wild rice pilaf with it.

Each of the moms are presented with a rose at the end of their meal. Here is the one I received. 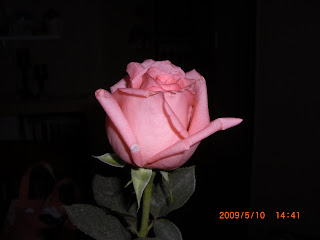 It's a beautiful peach color although it looks pink in the picture. I discovered something when I took this picture. On my Casio Exilim camera I have different "best shot" settings, one of them for taking pictures of flowers. I used that setting to take this picture and the background of the picture was blacked out so just the rose is showing. I thought that was so clever. I placed the bud vase on the breakfast bar and the background was looking down the hallway with the picture gallery. I didn't really want that in the picture. So using that setting took care of that little problem. Learn something new every day. :)

Denise called around 4 pm this afternoon. We had a nice little chat. She and her family went out for Japanese food today. There is a Japanese restaurant there in town that they've been going to often. They ordered sushi and then Denise and Nathan shared a Chicken Teriyaki combination, Stephen and Bekah shared a Hibachi Chicken combination. She took a picture of Nathan eating his lunch using chopsticks and posted it on Facebook so I could see my grandson eating with chopsticks. :) Looked like he was doing pretty good. Denise told me one of the reasons she eats sushi is so she can have some wasabi which she really likes. :) I am so proud of her because I can't stand it. I don't like horseradish and she does so that accounts for her liking wasabi.

We will see them on Monday, May 25th. We talked about a different route to take to get from Pearl, MS to Enterprise instead of going the way Google said to go. It is the same amount of miles just an easier way. From Montgomery it would be a straight shot to Enterprise. She told me Stephen's family is coming in that night, his brother and family from San Diego and his parents, younger sister with her son are coming from Ohio.

Gerry rode over to Whole Foods on his bike to get some of his vitamins and brought back a 6" apple pie that they sell. We have had these before and they taste like homemade. It is made by Gianna's Bakery in Castroville, CA.

I'm going to post some cards over on my other blog so come visit me there.
Posted by Betty Townsend at 5:53 PM