Gerry joined this group a while ago and has been on a few of their missions. There was a mission yesterday (Monday) morning and he participated in it. I've been wanting to go to one of these missions to see what they do. So I drove over to Mount Vernon Mortuary in Orangevale to watch and take some pictures.

I copied the Mission Statement of the group off their web site and included it so you can see what they are exactly. Here it is:

"The Patriot Guard Riders is a diverse amalgamation of riders from across the nation. We have one thing in common besides motorcycles. We have an unwavering respect for those who risk their very lives for America's freedom and security. If you share this respect, please join us.

We don't care what you ride or if you ride, what your political views are, or whether you're a hawk or a dove. It is not a requirement that you be a veteran. It doesn't matter where you're from or what your income is; you don't even have to ride. The only prerequisite is Respect.

Our main mission is to attend the funeral services of fallen American heroes as invited guests of the family. Each mission we undertake has two basic objectives:

1. Show our sincere respect for our fallen heroes, their families, and their communities.
2. Shield the mourning family and their friends from interruptions created by any protestor or group of protestors.

We accomplish the latter through strictly legal and non-violent means.

To those of you who are currently serving and fighting for the freedoms of others, at home and abroad, please know that we are backing you. We honor and support you with every mission we carry out, and we are praying for a safe return home for all."

The mission yesterday was for a veteran who was in his 90's and had served in the Army. After the graveside portion of the service, there was a 3 shot rifle salute. The family requested that a few of the PGR guys serve as pallbearers. When the flag draped casket was brought out, I started to cry. It is such an emotional feeling to see a flag draped casket.

Gerry asked me later what I thought and I said: "I cried". Seeing so many American flags is so impressive and emotional!!

According to their website the group was started in August 2005 after some people who said they were Christians protested at the funeral of a veteran back in the midwest somewhere. 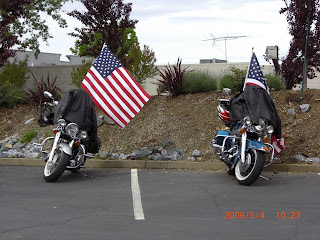 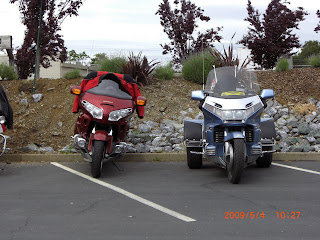 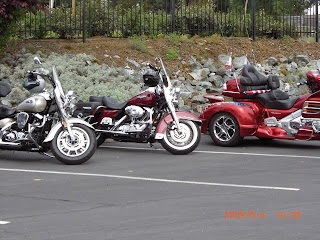 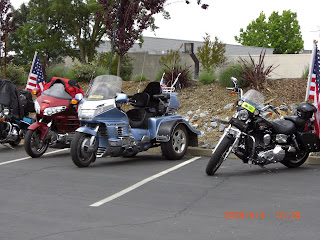 Two or three of these motorcycles are 3 wheelers. All very nice bikes! A few of the guys come in cars. Gerry drives his van. It is called a "cage" when a vehicle is driven to a mission. 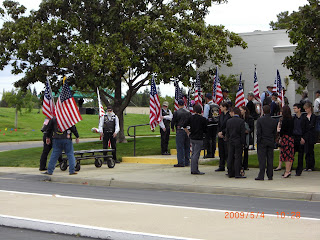 Getting ready to line the walkway where the family and casket will come out. I stayed quite a distance away so as not to be intrusive. And wouldn't you know it, I forgot to use my zoom :( 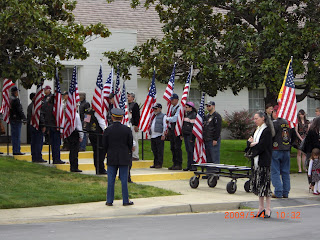 They are in formation now waiting for the casket. Gerry is the 4th one facing forward, next to the tall guy. The cart was used to place the casket on and take it to the gravesite. 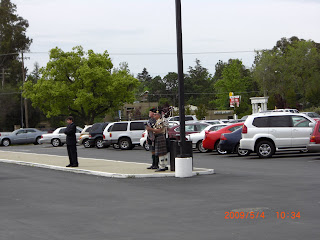 The bagpipers standing off to the side waiting. 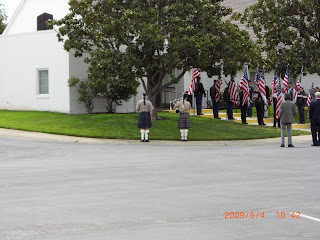 There was actually one bagpiper who has started playing and the casket came out a few minutes later. The other guy played a bugle at the gravesite. 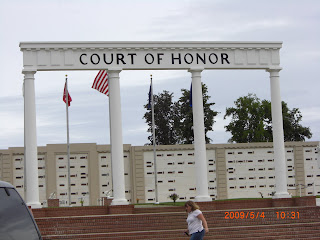 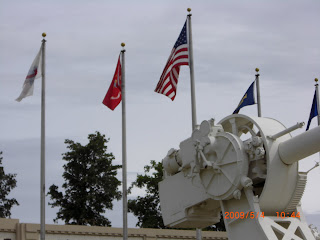 The flags of the four branches of the military. There was a plague in front of this cannon. I didn't go up close to it and take a picture of it. There were two of these cannons and Gerry just told me they were probably off a Naval ship. 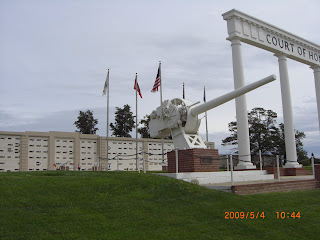 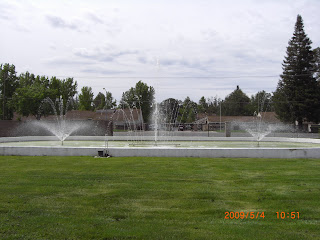 There are 2 huge fountains out front on both sides of the entrance to the mortuary. 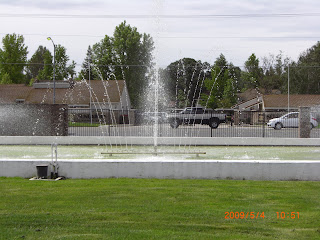 Those vehicles beyond the fountain are on busy Greenback Lane, a west to east main thoroughfare that runs from I-80 on the west to where it meets Madison Avenue, another west to east main thoroughfare. On the other side of I-80, the name of this street changes to Elkhorn Blvd and ends at the eastern border of Sacramento Metro Airport. Madison starts a couple of blocks before the street we live on and ends where it meets Greenback in Orangevale. 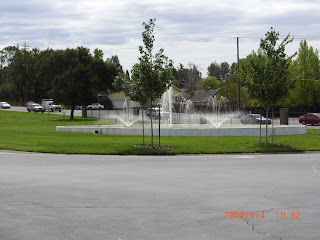 The fountain on the east side of the entrance. 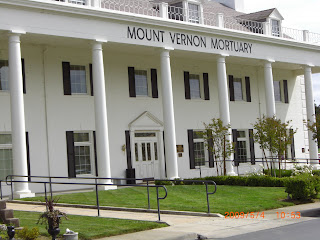 The main building of the mortuary patterned after "the" Mount Vernon.
Posted by Betty Townsend at 9:06 PM