On the Way to Big Spring, TX

On Wednesday morning, 5/20, after leaving El Paso, I was surprised to see what looked like orchards off in the distance. I expected to see more desert. 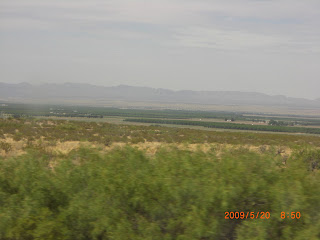 We came up on several trucks carrying some unique cargo. This was a very long, tall cylinder of some kind. Down towards the bottom was a slit with what looked like a ladder of some kind protruding out from this cylinder. The trailer was extended way out in order to accommodate this cylinder. There was a pilot truck following it due to it being an extra wide load. 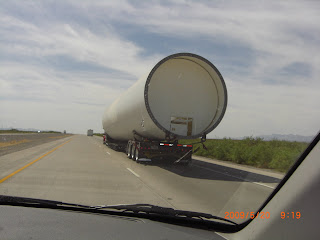 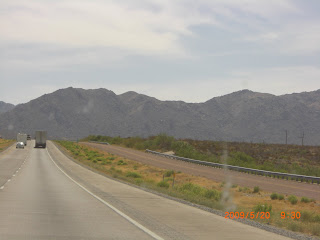 Several miles beyond El Paso we came upon the Inspection Station staffed by the Border Patrol. There are a couple of vehicles ahead of us and we are all waved through. The trucks are lined up in another lane. 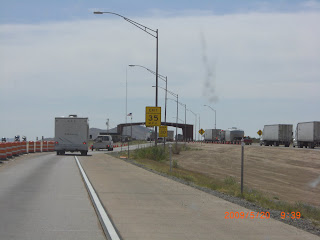 Here's another unique piece of cargo being hauled. It was another round cylinder of some kind, only not as large as the previous one we saw. There is a pilot truck following it too. 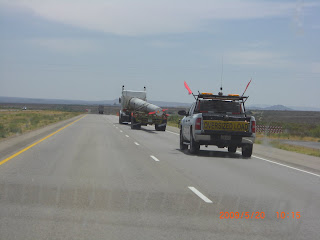 This is a rest stop that we stopped at just outside of Van Horn, TX. The rest stops in Texas are really nice and are maintained by private companies. They are very clean too. Texas also has picnic areas with no restrooms. Usually after a rest stop, a few miles down the road will be a picnic rest stop. The rest stops also have individual covered picnic tables. 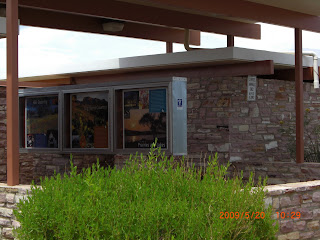 The plants growing at the rest stop were quite unusual. This had yellow flowers on it, have no idea what it is. I thought it was pretty and wanted a picture of it. This is the ladies side of the rest stop. 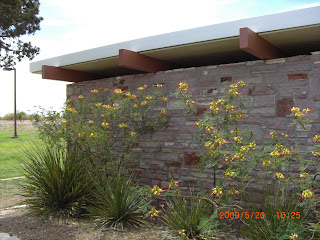 Some cactus growing in the front. The truck parked there was from North Carolina with a guy and his wife driving the truck. 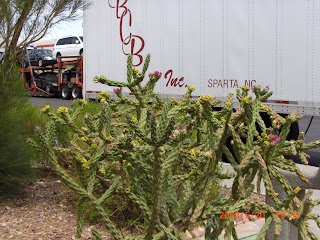 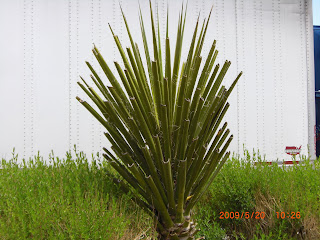 More of the plant with the yellow flowers on the guys side. 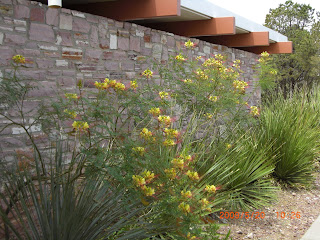 A map of the State of Texas showing all the different areas of Texas. 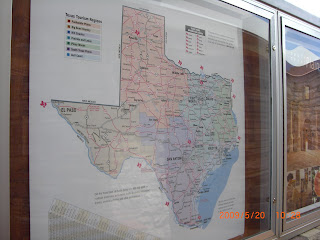 I liked these dark pink flowers growing out front. There were several planted. 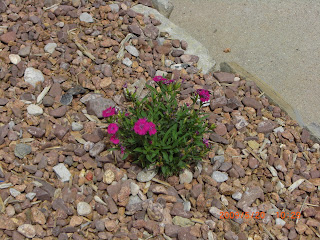 The highway goes around that huge rock there in the middle of the highway. Westbound on one side and eastbound on the other. I thought I got a closer picture of this. 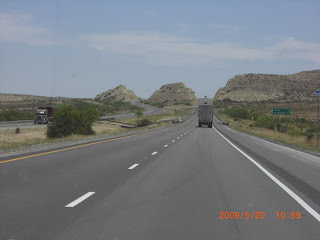 About 20 miles past the rest stop was the split where I-10 goes off to the right towards San Antonio and I-20 goes off to the left to Ft. Worth/Dallas. (Note: I edited this first sentence, my son Keith pointed out that I was incorrect in directions at this particular interchange. :) It was after midnight Friday night/Saturday morning when I was finishing this post). There was a road crew repaving the beginning portion of I-20 and an asphalt truck pulled out right in front of us. Thankfully we were able to slow down in time. 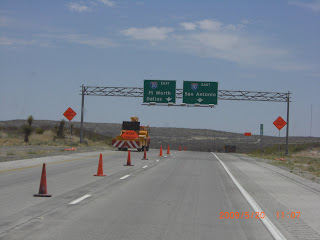 Can you believe this?? The speed limit is 80 mph during the day!! At night, it is reduced to 65 mph. Gerry kept the speedometer set on cruise control at 70 mph. That was fast enough! 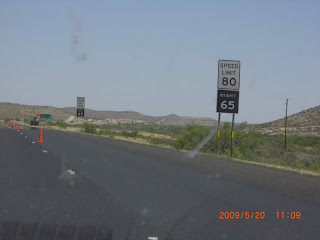 One of many oil drills that we saw coming into Big Spring, TX. 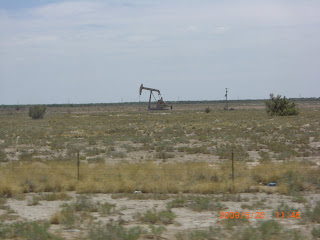 We got to Big Spring around 5 pm. Our motel was a Quality Inn, an older facility that had been refurbished. There were a few frustrations about that place so it was a good thing we were spending just one night.