Nathan Enlists in the Army & What's For Dinner?

It was the usual Thursday, bible study, pick up Andy from school and lunch at McDonald's. He was hungry today. He gobbled down his hamburger, finished all his french fries and ate the rest of Granddad's fries. I asked him if he had breakfast and he said "yes". Usually he eats his hamburger and maybe some of the fries. He's a growing boy, I guess!!

We came straight home after dropping him off. We were home for a little bit and Gerry said he was going for a ride.

Just before he left, Denise called. She had called me back yesterday morning and when I tried to return her call she didn't answer her phone. She goes into the coffee shop and works on Wednesday afternoons so Stephen can have some study time to prepare for their Wednesday evening bible study.

Yesterday morning she sent an email to Gerry and I and another friend of hers that Nathan (my grandson) had been talking to an Army recruiter and had taken a test on Tuesday. One of his scores was the second highest of the 35 people taking the test. He spent most of the day with the recruiter. They talked about the different fields he wanted to get into. Denise and Stephen were hoping he would go into aviation and maybe stay close by.

He chose to go into being a Combat Medic. The recruiter called last night and told him she got a slot for him. He goes to Basic Training on August 10th at Ft. Leonard Wood Army Post in Missouri. Well, I'm assuming that is the post, Denise just knew it was in Missouri. I googled it and that was the only Army post that was in Missouri. After he is done there, he goes to Ft. Sam Houston Army Post in Texas for his AIT training for 18 weeks. After that he goes to Ft. Benning in Georgia for Ranger Indoctrination and then Ranger School. He'll also get EMT training and he could be attached to a unit at Ft. Benning or go elsewhere.

Today they had to go to the Social Security office to get a replacement card. His wallet got left in his car at the mall where he worked in Fayetteville, NC and got stolen. He hadn't gotten it replaced yet. I think Denise told me he leaves tomorrow to get sworn in but I don't remember where she said he was going. His birthday is August 16th so he'll be in basic training to celebrate it.

Stephen spent several years in the Army, Nathan was born in Germany while Stephen was stationed there. He has grown up around other kids both at school and church whose dads were in the Army. They lived in Fayetteville, NC where Ft. Bragg is located and where Stephen was stationed when he came back from Germany. So joining the Army would be a natural thing to do for him. He will be able to have the GI bill to go to college later if he wants to do that.

So being there for his graduation in May just got all the more important to me. It may be the last time I get to see him for a while. I haven't been able to be around him a whole lot during his growing up years, however, the visits I've made over the years have been very precious. He is a super fantastic young man and I know he will do a great job whereever the military takes him. I will just be praying more fervently for him that God will protect him and keep him out of harm's way. I sure do love him very much!!

I'll have to get a picture on here some time soon.

Well, I didn't do anything for dinner again. Thankfully we got some Spam yesterday when we were at Costco so that's what we had. 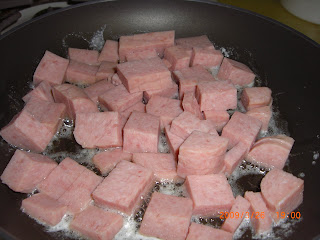 I cube it up and saute it in some butter. Then I add shoyu, sugar and some garlic powder. Mix it up real good and there you have it. 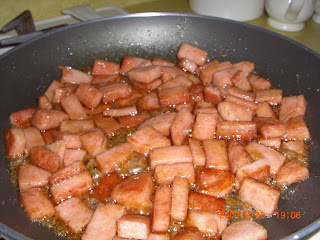 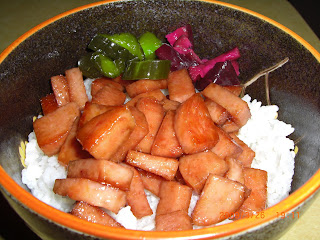 Serve it over hot rice and some of the Japanese pickles on the side and this is a great dinner. Gerry puts Korean hot sauce all over his. I know some of you are going "Yuck"!!
My daughter grew up eating Spam. I can tell you it was not her favorite meal. On one of my visits to see them, she decided that her kids were going to experience what she had to endure. They protested loud and long about eating Spam. Well, I fixed it. They were good troupers although they wholeheartedly agreed that they were glad they didn't have to eat it ever again. LOL!! I sliced the Spam, put it in a baking dish with slices of pineapple between the slices, sprinkled brown sugar over it all and added a little of the juice from the pineapple slices. Then baked it until the brown sugar melted and the spam browned up. I used to do something with carrots too but I don't remember what I use to do or I'd tell you.
Denise told me too that they had been under tornado warnings this morning and this afternoon there was a flood warning posted. They live in the southeastern corner of Alabama about 90 miles from the Florida panhandle in Enterprise. That area through there is called tornado alley. Last year there was a horrible tornado that went through the area and torn off the roof of the high school. Nathan's classes are held at the Community College. However, when a tornado is forecast they dismiss the kids from school. She said Rebekah was home by herself so she told Rebekah to go downstairs with her computer and the dogs and stay in the downstairs bathroom. Stephen kept checking on her and she was fine. He had to be at the coffee shop.
One more story to share with you and then I'm done for tonight. This has gotten to be a rather long post. After I got off the phone with Denise I noticed that she had a comment on Facebook. All it said was "Denise tried to burn the house down but she wasn't successful". Well, later after her mother and several friends wanted to know what happened, she put another comment on her FB. She was going to fix some sausage for dinner. She decided to put it in the oven instead of on the stove. Well, she set the pot holder down and went upstairs to talk to Rebekah. She smelt smoke and went downstairs. The burner was still on and the pot holder was on fire. I have gotten a pot holder too close to an open flame on numerous occasions and burnt a part of the pot holder. Thankfully, she didn't cause too much damage, just a burnt pot holder!!

Posted by Betty Townsend at 8:45 PM