I stopped at Bel Air on my way home this morning with the intentiion of getting some tortillas to make tacos for dinner tonight. Well, I got the things I needed and forgot the tortillas. Bel Air had fresh California grown asparagus so I did get some of them. Anyway, I ended up making Hamburger with Mushroom Soup and steamed the fresh asparagus. I also like these Japanese pickles. Well, that's what I call them. I don't really know what they are called. They are cucumbers I think. With hot rice, they are so good!!! I buy them at Oto's Marketplace, the Japanese grocery store in the south part of Sacramento. 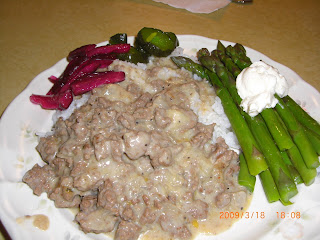 I blogged in an earlier post about this being my favorite meal since I was a little girl. (I don't know how to put a link in so you click on it and it takes you to an earlier post. I have to find out how to do that. If anyone knows, tell me, ok. Thanks).

I didn't have a picture in that earlier post. So here it is. I like to put mayonaise on my asparagus. This is grown right here in the Sacramento Delta. We get asparagus all year long, however, it comes from Mexico or South America. The asparagus grown here in the delta is usually harvested from March to about May. We do get some from the Imperial Valley which is east of San Diego and I think some from Washington state.

This asparagus is so tasty. I've been told that the skinny spears come from more established plants, the asparagus that is thick and large come from newer plantings. I always thought it was the other way around.

In April there is an Asparagus Festival in Stockton. We have gone to it several years in a row. They have Asparagus Alley where you can get asparagus in all sorts of ways, including deep fried which is sprinkled with fresh parmesean cheese, pasta, ice cream, even an asparagus margarita. The ice cream and drink sound gross. We always get the deep fried and the pasta. They also have the fresh spears that you can purchase. 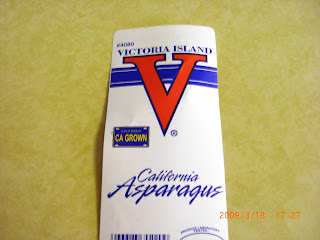 This is the brand label of the asparagus that is grown in the Sacramento Delta.

Oh, I forgot to mention, this morning Gerry did "show 'n tell" with the van to some of the bike club members. Such a show-off!! LOL!

Posted by Betty Townsend at 9:15 PM