Gerry is doing a ride around the Sutter Buttes this morning. I'm not sure if that is Yuba County or Colusa County. Anyway, it is north of here. The first weekend we had the Nissan and went on that long ride, we drove through there so he could see what it is like. It is where we saw the camel, miniature horses, etc. He is riding his single speed bike so that should be interesting. There aren't any real bad climbs so he should be fine. Well, the last I heard he was riding his single speed. He might have changed his mind this morning. He came to tell me goodbye at 5:15 am, I was getting up to go potty. I went back to bed, however, I was awake so just decided to get up.

My friend Michelle and I are going to a card swap in Rancho Cordova. I've mentioned it on my card blog. She will be over a little after 9 am. The swap starts at 10 and goes to 4 pm. There are 18 ladies signed up for it. We are doing potluck for lunch. 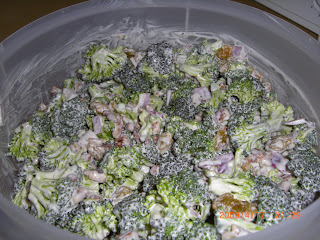 Here is my broccoli raisin salad that I made last night. This is so simple to make and is one of Gerry's favorites. I used 3 heads of broccoli, using just the florets. Added about half a package of golden raisins, some red onion diced (I don't measure so it was a small piece that I cut off and diced), about 1/4 of a package of pecans, chopped in my food chopper and the dressing is Hidden Valley Cole Slaw dressing. The dressing is what really makes this salad. Mix everything up and chill until ready to serve. I like to make this the night before and then before serving add a little more dressing if needed. Whenever I've taken this to a potluck, I come home with a empty bowl. I'll dish up some for Gerry so he can have it when he gets home this afternoon.

Yesterday when I drove out to go do a few errands, the accident scene was all cleaned up and unless you knew exactly where the bus bench had been, one would not know anything happened there. Usually around here flowers and other items soon appear at an accident scene. There wasn't anything there that I could see. Actually next to the storage place is an auto body shop, a drive way and then the pest control company. When I came back home I did see a young black man walking over towards the spot and sit down on the curb.

I got the new CD's put on my Mp3 player yesterday afternoon. Then I decided to remove some CD's from the carrier we have in the car and put the new CD's in it. Well, that led to other things and now I have a lot of the CD cases spread out in the living room waiting for me to place the removed CD's back in and get them organized again. I found a couple of CD's in the carrier that weren't on my Mp3 player so I did that too.

Denise called while I was playing with the CD's. I was sitting at the breakfast bar and my phone was by my computer, so I almost missed her call. She and Stephen were going out for dinner at either a Korean restaurant or Japanese restaurant. One of the towns that is closer to Ft. Rucker than Enterprise is, has several international restaurants. They've eaten at a Thai restaurant. She told me there's a small Japanese restaurant in Enterprise and on Thursday she went up there and got lunch for she and Stephen. She said it was pretty good so will have to try it while we are there visiting.

Dinner was quick last night. I've been hungry for a steak so I panfried a rib steak for myself. Gerry doesn't usually eat a steak unless its filet mignon. There was some Redondo sausage from Hawaii in the freezer so Gerry fixed that for him. I had gotten a hot one for him the last time I was at Oto's and bought portuguese sausage. I fixed rice and steamed some crook neck squash.

Well, it's almost 7 am so I better go get some breakfast and start getting ready. Have a great day and I will blog about the card swap on my card blog later.
Posted by Betty Townsend at 6:29 AM