One of my friends who has experienced episodes of vertigo told me her doctor told her she could take Dramamine for the dizziness. I emailed my doctor and asked him about it. He said the symptoms experienced with motion sickness for which Dramamine is taken, could be the same as those for vertigo. He said it would be alright to take Dramamine when needed. Gerry got me some Thursday night and I took a tablet before I went to sleep that night.

I slept pretty good and did not feel dizzy, however I didn't get up Friday morning until almost 10 am. I was a little dizzy when I first sat up. I still have the feeling of pressure in the back of my head and it has caused some feeling of being light headed. I will be so glad when this is over.

Gerry took me out to do some errands Friday afternoon. I will write about that on my other blog since it's card related.

He went for a bike ride today so I played at my craft table. It turned out to be a really nice day after all the rain we had earlier in the week. Friday was a nice day too after the rain stopped in the morning.

I hadn't been to Sushi Masa's for a couple of weeks so I went there for lunch today. It was the first time to drive in a week. Miyoko was working today. The waitress who works the evening and weekend shifts had to be out so Miyoko was filling in. We were surprised to see each other. Tomiko wasn't cooking. She only cooks on Tuesday and Wednesday lunch. She is suppose to be going to Japan some time soon.

They spoil me in there. Tomiko usually puts something extra on my plate when I go in. Since she wasn't there, Miyoko brought me some edamame and then a small dish of some vegetables. Don't know what it is called, it had a piece of carrot, a piece of potato (I think), a piece of the tofu that's used to make Inari sushi and some seaweed that was twisted in a knot. (At least I think it was seaweed). It was all really good. Then I ordered my usual Chicken Teriyaki.

I was going to go to Bel Air, however, felt a little weak so came straight home after I ate. I noticed there was a lot of leaves and tiny rocks on the floorboard on the driver's side of the van. So after I got home, I got a small wisk broom and cleaned that up. I need to get a dust buster out there and vaccum. I don't want that stuff to get ground in the carpet that it did the Ford wagon.

Some time ago on one of my shopping trips at Bel Air, I noticed some bottles of soda in a cold case that had some speciality sodas and beers in. I was surprised to see soda from Hawaii made by Waialua Soda Works located on the North Shore of Oahu. They make several flavors, Bel Air only carries the Root Beer and Cream Soda. I buy some whenever I can remember. I enjoy both flavors. They are made with cane sugar and have a very distinct flavor. I drank a bottle of the Root Beer earlier. 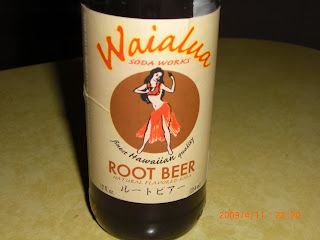 Here is the bottle. The bottle caps have a hula girl on the top. Gerry has saved some. He found a company online that will make a rear view mirror that fits on eyeglasses with bottle caps. He clips a mirror on his sunglasses when he rides his bike.

Tomorrow is Resurrection Sunday! I've always called it Easter Sunday like most people. When Denise and Stephen first started attending Calvary Chapel in Fayetteville, NC, I noticed that they referred to Easter as being Resurrection Sunday. I really liked that so I've started referring to Easter in the same way. It is really about Christ being resurrected from the grave after his crucifixion on Good Friday.

So however you celebrate it, have a fantastic day!
Posted by Betty Townsend at 10:51 PM