Yesterday there was a Patriot Guard Riders mission at the airport. Gerry asked me to go with him. They would be welcoming a soldier, Juan Carlos Hernandez, who had been injured in Afghanistan. Ryan, his buddy lives in Roseville and he was coming to visit Ryan.


Here he is coming down the escalator. That is the back of the head of his buddy. 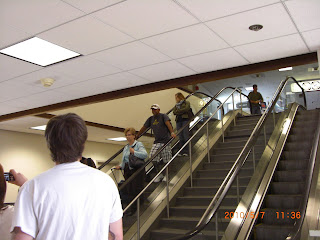 Being greeted by Ryan and Ryan's mother. 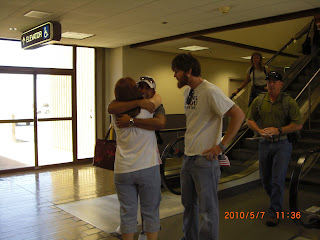 John Riley, the ride captain and another PGR greeting him. 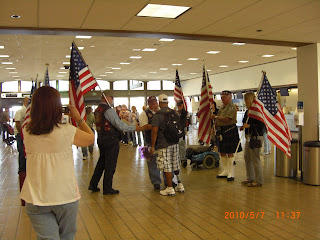 Gerry in the dark cap standing in the flag line. 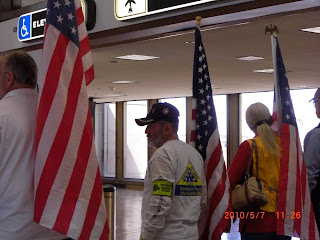 The American Red Cross was there to greet him. The black woman was the spokesperson. 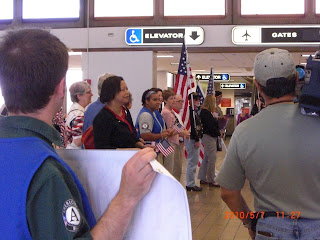 Some of the people there to greet him. Gerry is on the right next to the tall man in the white shirt. 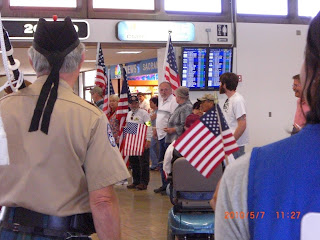 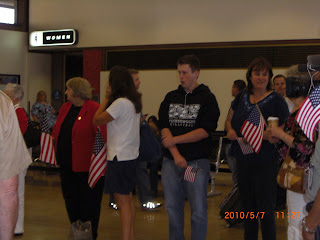 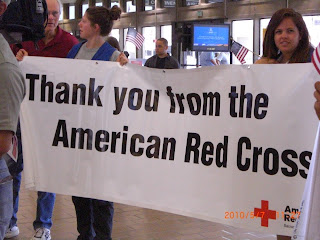 I spoke with this man and the man who played the bag pipe. This man was a WWII vet and served in the Navy. Very interesting gentleman. 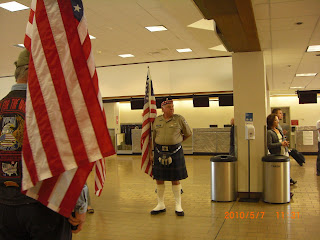 After the PGR was dismissed, Gerry walked up to me and asked me if I saw the t-shirt Carlos was wearing. He couldn't believe I hadn't noticed. There was too much going on. Anyway, it was a t-shirt from Mellow Johnny's Bike Shop in Austin, TX. This is Lance Armstrong's bike shop and we visited it in June of last year when we stopped in Austin. So I took a picture of Gerry and Carlos. 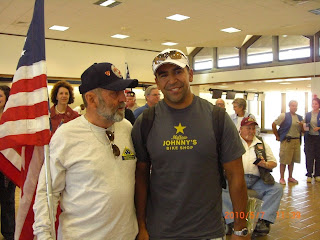 I have included the email Gerry received from John Riley. It tells the story a lot better than I can write it here.
On November 26-2009 the PGR was invited to form a flag line at SMF to welcome home Ryan Bresnahan who was coming home from Afghanistan for a period of R & R.
Our contact was Tracy, Ryan's mother.
The following was part of an e-mail received from Tracy regarding a request for another welcome home:
You may remember that my son's homecoming was bittersweet in that the day he left Afghanistan he got word that his buddy, Specialist Juan Carlos Hernandez was in a Chinook that was going back and forth to the front lines (4 times) to rescue soldiers under attack. The 4th time the Taliban were just waiting for the helicopter. An rpg hit the Chinook and blew up Carlos' foot. The Chinook made a safe emergency landing at the closest base and all aboard were safe...except Carlos. Long story, short, Carlos had a final surgical amputation and recovered at the Fisher House in San Antonio, TX. Carlos was supposed to leave Afghanistan a couple of weeks after Ryan. Both young men were scheduled to be discharged from the Army in mid-January and had plans to drive across the United States visiting their buddies and family until reaching California. Carlos, a Texan, was going to live with us and the boys had plans on going to college together. Well, plans have changed! This brave young man has made an extraordinary recovery and is participating in the Wounded Warriors/Road to Recovery. Ryan had the opportunity to visit with Carlos for a few hours at Incline Village this winter during a Wounded Warriors activity. This young man feels like a son to me even though I have never met him or heard his voice. We have spoken several times online and I immediately contacted Blue Star Moms/Houston when I heard the sad news. Sending him goodies is one thing, but being able to hug him in person is another. Carlos has a 9 day leave and he is coming here to visit with his buddy Ryan Bresnahan.Carlos told me that he feels bad that he never got to "walk the walk" (the ceremony where the entire company gets welcomed back) because his trip was straight to the hospital in Texas, So as far as I'm concerned, this is his homecoming, his chance to walk the walk. I would like to request the presence of both the Blue Star Moms and Patriot Guard Riders when his flight arrives this Friday, May 7th: American Airlines #1209 , 11:20 am. As a courtesy to both Ryan and Tracy, it has been decided that the PGR will honor this request in conjunction with the Blue Star Moms and do our part to welcome Carlos "home" to Sacramento. The details of parking and staging are as follows:
DATE: FRIDAY, MAY 7, 2010
STAGING : 10:30 am Air Cargo Terminal (on street parking)
BRIEFING and TERMINAL B WALK: 10:45 am
ARRIVAL & FLAG LINE IN TERMINAL "B"
KCRA3 News had 2 camera men there to record Carlos's arrival. I've included a link to the video. Towards the end of the video there is a very quick shot of me. I'm wearing a red top. Gerry is standing there too, his flag can be seen. This was right after I took a picture of Gerry and Carlos. Carlos is a really neat guy. I think he was a bit overwhelmed with the reception. It was a bit emotional too. I got teary eyed when he came down the escalator and everyone there started clapping and whooping and hollering. Even the people walking through the terminal stopped to watch. One lady was videoing the whole thing on her phone.
http://www.kcra.com/video/index.html
Posted by Betty Townsend at 3:55 PM