This is one of the desserts that we had when we were in Enterprise. Denise's friend, Selena made it. I thought it looked kind of familiar and that I had a recipe for it, however it was called something else. Selena made it again before we left.

I asked Denise to ask Selena for the recipe and she said she would. I asked Denise about it after we got home and she told me it was the same as the recipe I had, Selena increased the amounts of some of the ingredients. So I went searching for my recipe and sure enough found it. My recipe is called Cinnamon Cream Cheese Squares. I am not sure where I found the recipe, I've had it for a few years. I made it for an Easter brunch at church.

I got the ingredients to make it when I was at Bel Air last week and made it earlier today before it got too warm outside. So here it is: 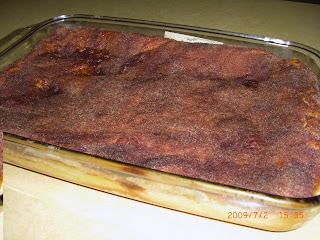 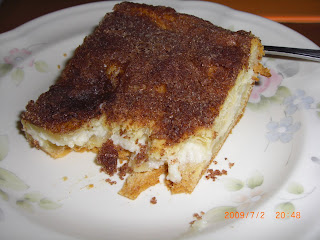 It is very rich, however so absolutely fantastic!!
I'll put Selena's variations in brackets. I made it like she does. I think the next time I will cut down on the sugar and cinnamon topping a little.
Mexican Cheesecake (Cinnamon Cream Cheese Squares)
2 - 8 ounce tubes refrigerated crescent rolls (I used Pillsbury)
2 - 8 ounce packages cream cheese, softened (I used Philadelphia)
1 1/2 cups sugar, divided
1 tsp. (1 T) vanilla extract
1/4 ( 1/2 ) cup butter or margarine, melted
1 tsp. (1 T) ground cinnamon
Unroll one tube of crescent roll dough and place in a lightly greased 13x9 baking dish. Seal seams & perforations and stretch to fit pan; set aside.
In a mixing bowl, beat cream cheese, 1 cup of sugar and vanilla until smooth. Spread over dough.
Unroll second tube of dough and place over cream cheese mixture, seal seams & perforations and stretch to fit.
Brush butter evenly over top; sprinkle with cinnamon and remaining sugar. (I mixed the cinnamon and sugar in a bowl first)
Bake at 350 degrees for 30 minutes or until done. Cool; cut into squares.
Note: I didn't use all of the melted butter. Selena increases the amount of vanilla, cinnamon and butter. The next time I won't use as much sugar and cinnamon on the top. My recipe says it makes about 3 dozen squares. That would depend on how big the pieces are cut.
So give it a try. I am sure you will enjoy it too!! :))

Posted by Betty Townsend at 9:18 PM