There's a lady at church that has a huge garden each year. She brings her produce to church each week to sell and she does quite well with selling her produce. She has every kind of vegetable available and she also cans, makes jams and jelly, pickles, okra. I wanted some fresh green beans to fix with a piece of top sirloin that I had in the freezer and was going to get some at Bel Air when I was there on Saturday. I decided to wait to see if Agnes had some on Sunday. Sure enough she did. I asked her for a pound and she actually gave me a pound and a half all for the grand sum of $1.

So I fixed them last night with the piece of meat I had. 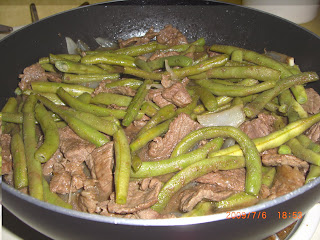 I should do like my friend Jalna does and take pictures with each step because I don't use a recipe for this particular dish. However, I never think about doing that. So let me see if I can tell you how I do this.

First I snip the ends off the beans, if some are too big, I cut them in half. Then I put them in a bowl with some water and set them aside. Next I slice the meat using a VERY sharp knife and cut the meat on a slant across the grain. This is hard to describe, I have the side of the knife laying on the top of the meat as I slice the meat getting thin slices. I cut up half of an onion in thin wedge like pieces and set that aside. If I'm using fresh garlic and ginger (I didn't have any last night) I get that peeled and cut up.

Next I heat up a pan on high, put a little bit of olive oil in and when the pan is hot, I put the garlic and ginger in and stir it around. You'll know the pan and oil is hot when the oil starts popping. Then I add the meat in and stir fry that quickly, stirring the garlic and ginger into the meat. When the meat is almost cooked through (there'll be a little bit of pink left), I add the onion and stir that around, then add salt, pepper, shoyu (soy sauce - in Hawaii we call it shoyu) and some sugar. I can't give a measurement because I don't know. I just add it in. Mix this all together and then add the vegetables. Then I add more salt, pepper, shoyu and sugar. I just did green beans last night, sometimes I add fresh mushrooms. You can add other kinds of vegetables. I stir everything together, turn the fire down and put a lid on the pan and let it simmer until the beans are fork tender but still crunchy. Some of the thinner beans got cooked a little too much. Then serve it over rice.

A couple of weeks ago Denise had a post on her Facebook that she had fixed this for dinner and her family said it was yummy. This was a meal she liked when she was still home. I use to make it often, however, beans have been expensive in the grocery store and not very good looking. Agnes' beans were fantastic. She said she had picked them Thursday evening. She does all the gardening by herself. She is in her 70's. She has quite a bit of property and has a fully equipped kitchen in a separate building on her property that is solely for doing her canning, baking and tending to her vegetables.
Posted by Betty Townsend at 9:36 PM