This past Saturday we were invited to a birthday party for a friend, Nancy Riddle.  She was celebrating her 60th birthday.  Three of her daughters and her husband planned a surprise for her.  These girls are so creative.  They did a beach theme...they did an awesome job.  One of the daughters, Janet, made the birthday cake.  It is individual cakes put together.  However, I think Gerry told me that the little blue cakes were actually cereal put together and frosted.  She used Fondant icing on the cakes. 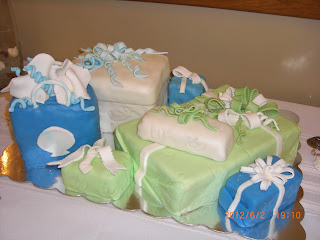 My pictures don't do justice to the way this looked IRL...it made a beautiful presentation. 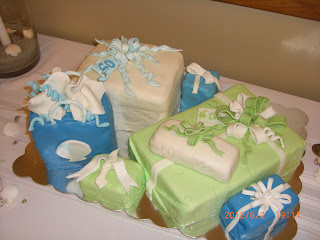 We've been friends with Tom and Nancy for a number of years.  We used to go to church with them and their family.  Tom and Nancy were one of the 3 married couples on a church trip to South Korea in 1997.  Tom is 10 days older than my youngest brother...he decided we should be brother and sister so he calls me Big Sis and he is Little Bro.  They went on another trip to Korea on their own...two of their daughters went with them and another person, who has become a very close friend of theirs.  They've also made a few trips to Hawai'i and love it.  One year the whole family went over and worked on the USS Missouri.

We went to Sam's Club today to refill a prescription for me.  After a hotdog lunch, we did some shopping.  One of the items we purchased was this package of Asian Style Beef Sirloin.  Gerry put it on the grill and we had it for dinner.  Wow!!  Super ONO (as we say back home).  The package was almost 2 lbs of meat, cut in thin slices.  The slices were rather large so after it was cooked, Gerry cut the slices in strips.  We ate a large portion of it and have leftovers for another meal.  It is so good, it was hard to stop snacking on it after we had finished dinner. 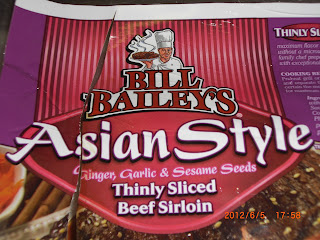 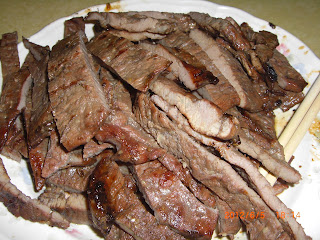 Posted by Betty Townsend at 9:51 PM