The breakfast club got together today. It was our turn to pick the place to go. We've had a Groupon coupon for The Omelet Professor so we chose to go there. We got there right at 8am. Eric Rench was waiting....strangely enough the restaurant wasn't open. They are open from 7am to 1pm according to the sign on the door. There was no sign on the door saying they'd be closed. So Gerry suggested we go to a place in Orangevale called "Ashley's Country Kitchen. Another couple had driven up. So they followed us over to Ashley's and Eric was going to wait for anyone else that showed up. 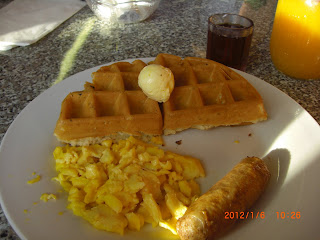 Here is the breakfast I had...half of a Belgian waffle, 1 scrambled egg and 1 sausage link...with OJ to drink. It was perfect...I think it was called Silver Platter on the senior menu. Gerry's bike club had gone here on Wednesday. They've been open about a month and have a sister restaurant in Granite Bay called Jessie's Country Kitchen.

My breakfast was good and I actually "cleaned" my plate. The group numbered 10 people today. Gerry said a Burger King was there and then a Mexican restaurant.

We started going through boxes that have been stored in our spare bedroom today. There is stuff all over the living room floor. I had 3 piles going on...keep, trash and Goodwill. The trash has been taken out, the Goodwill stuff is in the back of Gerry's van, plus the totes that need to get taken to storage. I've set aside stuff that I want to keep...I will probably go through it again and see what I can do without.

As I was going through each box, I realized that the reason the boxes were in the spare bedroom is because it is things I don't want in the storage unit...so I've got to figure out where to put them or just part with more.

Elizabeth came over and she took home two big shopping bags full of stuff for she and her girls. She was also going to see if Jenni wanted anything...what they don't want will be saved for the girls youth group to put in their annual spring rummage sale. The stuff I've designated "Goodwill" may go that route too.

Our mobile home park does a garage sale in May...I don't want stuff sitting around until then. I did find the choir picture I just posted and I'm excited about that. I will work on more tomorrow.

By the time Elizabeth left, we were tired and starving so we drove over to Brookfield's for dinner. It is 3 blocks from our house...it is a little more than a Denny's type restaurant. I had a chopped steak dinner (hamburger patty with onions, green chilis and cheese on top of it, covered with gravy) and Gerry had meatloaf. I didn't think to take pictures...
Posted by Betty Townsend at 7:58 PM