In celebration of the beginning of the Chinese New Year, the Year of the Dragon, I wanted to write about my great grandfather, Chung Hoon, who arrived in the Hawaiian Islands sometime between 1850 and 1852.  It is believed he was on one of the first ships arriving with Chinese immigrants, who worked in the sugar cane and pineapple fields.

Here is a short writing that was found in the book entitled "Chinese Historic Sites and Pioneer Families of Rural Oahu"; compliled and edited by Wai Jane Char and Tin-Yuke Char.  It was published by the Hawaii Chinese History Center and distributed by University of Hawaii Press, Honolulu 1988

Chung Hoon Family:
Chung Hoon was a prominent Chinese of the 1850s, very active in various business enterprieses.  Chung Hoon was married to a Hawaiian woman.  He was one of the elite Chinese merchants who planned and gave a Chinese ball to honor the marriage of Miss Emma Rooke and King Kamehameha IV.  Chung owned Chung Hoon Company, which was a factor or agent for several Chinese sugar plantations on the Big Island.  His store in Honolulu, "the new Stone Store" at 11 Nuuanu Street, carried imported goods according to the Hawaiian Journal of History (1974).  His home was at 42  Emma Street.

He was also a participant in the founding of the Lin Yee Association's Manoa Chinese Cemetery.  Chung had a leadership and philanthropic position in the Chinese community of the 1850s.

In his book, Chung K. Ai said this about Chung Hoon:
Chung-Hoon was grandfather of William Chung-Hoon, Jr., for many years treasurer of the City and County of Honolulu, and father of William Chung-Hoon, Sr. (1859-1934), who was connected with E.O. Hall & Sons [for forty-three years].  William Chung-Hoon, Sr. had been taken by his father, when  young, to China [September 15, 1863, on S.S. Palmer] and educated there, and therefore spoke excellent Cantonese.  The grandfather was an alert businessman.  When the Hawaiian government offered a bonus of $25 for every Chinese immigrant brought to these islands, the grandfather chartered a vessel, sailed to Canton, and brought back many Chinese laborers.  He was also an advisor to King Kalakaua and a frequent visitor to the Palace.

The story I always heard about my great grandfather was that he sailed to Hawaii with 4 other young man from his village in Canton.  Because they had no family with them, they became family to each other.  In doing some research on the Internet, I found where he became a naturalized citizen of the Hawaiian Islands in 1867.

It is not exactly known when the name Chung Hoon became the surname and was hyphenated. 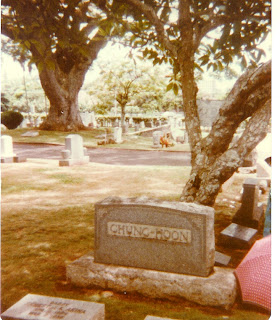 I took this picture of the Chung-Hoon family plot in June 1981.  We were there for the graveside services of my father.﻿ 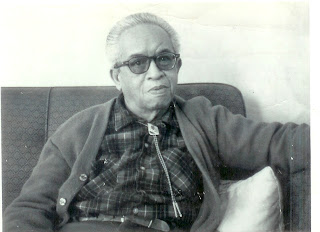 I treasure this story about my great grandfather.  His legacy lives on in the many members of the Chung-Hoon family.
Posted by Betty Townsend at 9:19 PM