Stage 2 of the Tour, downtown Sacramento, Monday 5/16 - a new Nissan Leaf, one of the sponsors 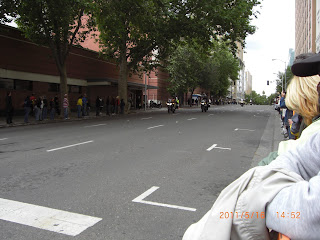 Here comes the Peloton, heading east on 9th Street, we are at the corner of 9th and L Streets. 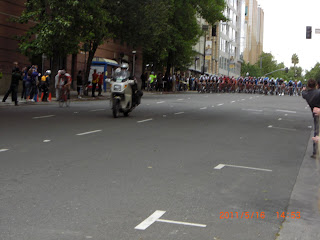 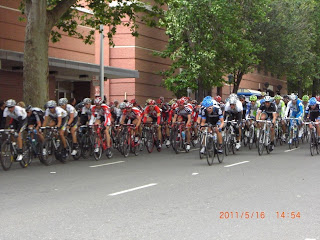 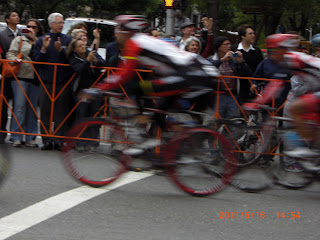 They are a blur as they whiz by... 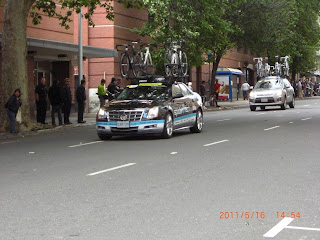 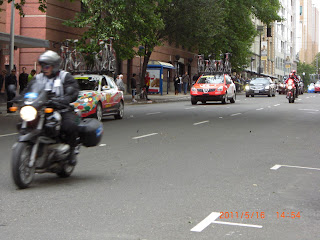 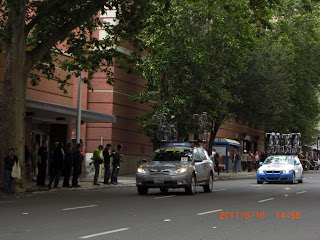 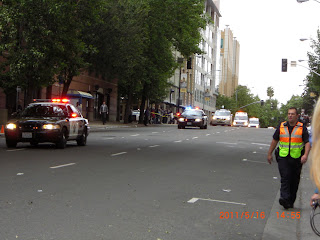 Part of the CHP escort and emergency vehicles. The police officer on the right had quite a job making sure no one crossed the street in front of the riders and vehicles 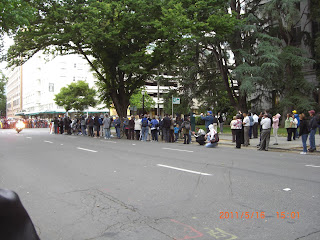 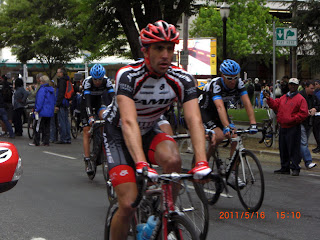 A few of the riders rode by after the race. 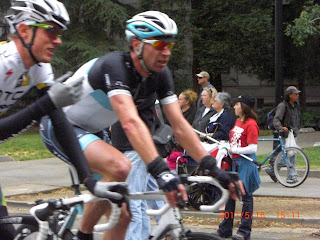 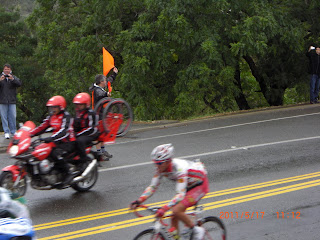 Stage 3, Tuesday, 5/17 in Folsom. This rider was part of the 6 man breakaway, ahead of the Peloton. 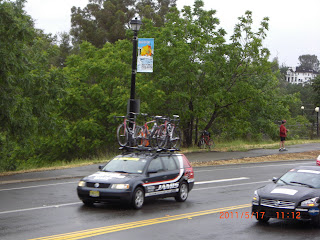 These team cars are for the riders in the breakaway. 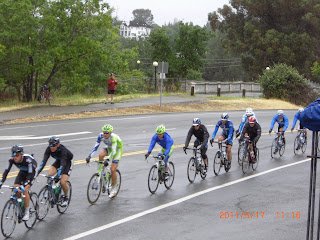 Here's the Peloton. It was raining lightly and the streets are wet. It is also cold and windy. 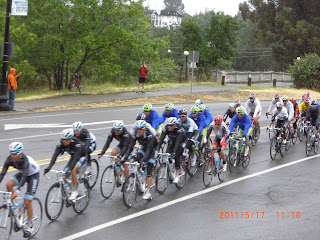 They had their rain gear on. 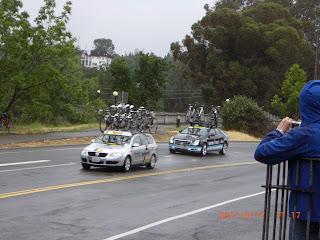 More team cars...these are for the riders in the Peloton. 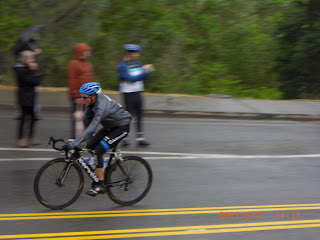 The lone rider in back of the Peloton. Hopefully he was able to catch up with the rest of the riders. The first stage of the Tour of California was to start in South Lake Tahoe on Sunday. Unfortunately, it was snowing up there. They postponed the start time a few hours to see if the weather would clear up. They also shortened the race. The plan was to go around the lake one and a half times ending at Northstar which is on the north side of the lake. Because of the weather, they were going to go around just the west side of the lake ending at Northstar. It kept snowing so the race was cancelled completely. The second state was to start at Squaw Valley, still in the Tahoe area. However, the roads had iced over Sunday night so the location was changed to Nevada City, ending in Sacramento. So instead of a 130 mile ride, it was a 70 mile ride.

Gerry and I left home before noon and took the light rail into Sacramento. We had a couple of hours to walk around and look at what the vendors had to offer. We decided to get some lunch and had about 45 minutes after we ate to wait for the riders. We stood at the corner of 9th and L Streets to watch them come into town. We thought they were coming down L Street, instead we found out they were coming down 9th Street. There were barriers across 9th. So we had to get out of the way as the barriers were opened up. One of the barriers caught the back of my shoe and scraped my heel. There was a guy in front of me with two large dogs and I couldn't get around them. The guy that was pushing the barrier apologized.

Across L Street, on 9th...there was a huge arched balloon going across from side to side. Just minutes before the riders appeared, it deflated. There was a huge scramble to get it out of the way...with mere seconds to spare.

It is such an impressive sight to watch the riders come into sight. They are riding fast and are so close together, it is a wonder they don't all crash.

When we moved over to the east side of 9th, there weren't any barriers up so we were standing on the curb. The riders were so close to us as they whizzed by. Everyone was whopping and hollering as they went by.

On Tuesday Stage 3 started in Auburn, came through Folsom on their way to Modesto. So we drove over to Folsom to watch them ride through. We were going to go out a little ways outside of town. Instead when we got to Folsom, Gerry turned off on Leidesdorff and drove through a couple of parking lots looking for a space. We ended up parking in a new parking garage which was right off of Riley and Scott. We were able to stand at the corner of Riley and Leidesdorff to watch the riders come up Riley after crossing Rainbow Bridge. It had started to rain lightly and it was cold and windy waiting for them to come through. One can only imagine what it was like for them having to be out in it. At least it wasn't snowing. :) We left as soon as they passed by.

We were going to go eat at Sutter Street Grill. It would have been a little difficult getting to it since it is right where the riders went past. So then I thought of Lake Forest Cafe which is on Folsom Blvd. We drove out there, unfortunately they were closed. So we ended up going to a Japanese restaurant on the east side of new Folsom. That was a big mistake. The prices for their lunches were very expensive, the service was horrible and the food was bad too. I told Gerry that we had been there before, he didn't remember that we had. So that's a place we won't go back to again.

The tour will end next Sunday in Thousand Oaks which is off of Highway 101 in Ventura County. Hopefully the weather cooperates and the rest of the tour is pleasant for them.

Before I forget, riding light rail is quite an experience. I think this was the 3rd time we've ridden it. We don't have to drive very far to get on it. When we got there on Monday, we missed one train. They run every 15 minutes so we didn't have to wait very long. They have security people around the stations now. The one that was there on Monday told us to stand at the spots where the front of the train stops. He said during the middle of the day there are a lot of teens that ride the train, they play their loud music and usually sit in the back cars of the train. There were several seats empty in the front train so we were able to sit together. Coming back, the trains were packed. We had to stand for most of the way and then a couple of stops before we got off, a seat became available so we could sit. It was much nicer being in the front cars so we will have to remember that for any future rides. We've encountered some spooky people on past rides.
Posted by Betty Townsend at 7:24 PM