This past Sunday evening 8 PGR members welcomed home a group of 31 WWII Vets who left Friday morning to visit the WWII Memorial in Washington, DC. The group included 2 women Vets.


Here's a group of them coming down the escalator at Sacramento Metro Airport. 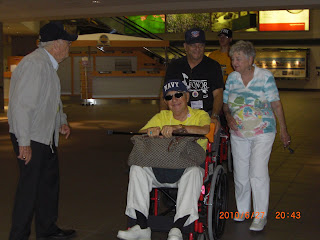 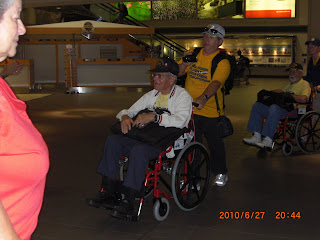 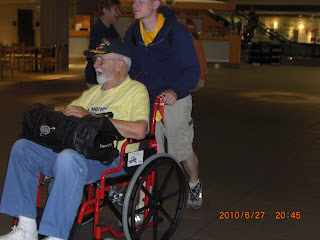 The woman in the yellow t-shirt clapping her hands and her husband coordinated this trip for Honor Flight Northern California. Her daughter in the blue t-shirt is at the door of the elevator telling the vets using the elevator which way to go. The woman in the wheelchair is one of 2 women Vets on this trip. 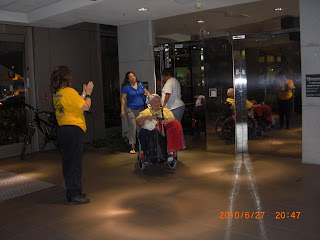 PGR members who formed a flag line at the bottom of the escalator are from left to right: John Riley (ride captain), Gerry, Wayne (Wayne's step-daughter and her husband belong to the bike club that Gerry belongs to), Mickey Giacomo (he is the safety officer. you might recognize him from pictures I took of the Sea to Shining Sea wounded warriors cross country bike ride), John Steiner (assistant state captain, capitol region for the PGR...in otherwards "the boss"), Ardis Riley (John's wife) and a husband and wife whose names are not known by Gerry. 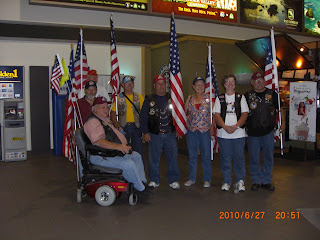 The gentleman in the dark tank top with his back to the camera was waiting for his son to come home. The PGR welcomed him home too. He is the young man second from the bottom of the escalator. He was on a flight from Hawaii where he is stationed at the Kaneohe Marine Corp Air Station. And recently returned from his second tour in the middle east. The marine base was not too far from where I lived in Kailua and where my ex was stationed when I met him. 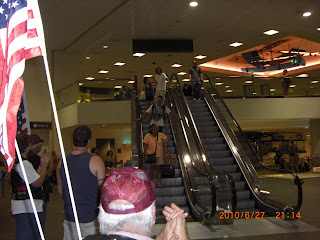 Here below, I have included the summary email Gerry received from John Riley, the ride captain for this mission.
**************
As previously announced, the PGR was invited to be present and assist with as well as stand a flag line honoring 31 WWII Vets who were on a flight to Washington, D.C.. It would be proper to note that 2 of the 31 vets were ladies. This was a 2 PART MISSION:
PART 1 On 6/25 when 9 PGR members arrived and although no assistance was needed (each VET had a GUARDIAN assisting them) we had an opportunity to meet and talk with these real life Heroes. After their group was completely assembled we were notified they were ready and I led the group to our flag line which was set up at the base of the escalator going up to the secure area for passengers where they were all screened and boarded the plane for the trip to D.C. We had two of our PGR group stand watch and assist with loading the elevator and making sure they got to the upstairs area in good fashion.We were joined at the head of the flag line by 2 TSA employees who were dressed in their CLASS "A" uniforms and who rendered hand slautes to each and every one of our heroes. A VERY IMPRESSIVE SIGHT.
Our participation for the send off was completed.
PART 2
On 6/27 13 of the PGR gathered once again at Terminal A of Sacramento International Airport to stand a flag line for our 31 returning WWII Vets. The plane arrived and the airline let all passengers off with the exception of "our guys," who came down as a group without other passengers. This was at the request of the group leader, and worked very well. If one of our heroes came down the elevator, we escorted them to the bottom of the escalator and made sure they went through our flag lines, while at the same time those who could, came down the escalator also went though the flag line.Several of the Vets were asked how the trip was, and you could tell by the sparkle in their eyes, it was OUTSTANDING, thus confirming what they were saying.One of the saltier gentlemen was asked if he would prefer a wheel chair to which he relpied - "Hell NO. I am 99 years old now, when I turn 100 I get one." A real character!Although our parts of this mission was completed, we all saw something in these Vets that swelled us up, maybe drew a few tears, but most certainly made us PROUD AS HELL of these Vets. It was obvious that they have something special in them that makes them what they are, and made them what they were over 65 years ago. . . . WINNERS!
Several of the passengers who deplaned prior to our group asked why we were there, and after an explanatin of the Honor Flight, decided to hang around and joined us in the welcome home. THANK YOU folks. You helped make this one very specail night.To those members of the PGR who were able to attend this mission, THANK YOU SO much. You have helped write yet another chapter in the history book of our returning Vets.
To HONOR FLIGHT NORTHERN CALIFORNIA: Thank you for sponsoring the very important part of our heroes lives. Without your funding, I am sure this would never have happened.For more information about HONOR FLIGHT NORTHERN CALIFORNIA please visit the following web site: http://honorflightnorcal.org/
To our returning heroes: THANK YOU ALL for your service to our country. We truly consider each and every one of you a real HERO, and YOU WILL NEVER BE FORGOTTEN!
Respectfully submitted with PRIDE and HONOR,
John RileyRide Captain
SPECIAL NOTE: June 6, 2010 saw the 66th anniversary of D-day, and it is estimated that we are loosing our WWII vets at a rate of 1,000 a day. If an opportunity arises, take a bit of time and talk to them about their experiences. It was another day and another time, but one well worth capturing for our own history and posterity.
Posted by Betty Townsend at 12:14 PM