God Bless America,
Land that I love,
Stand beside Her and guide Her
Thru the night with a light from above.
From the mountains, to the prairies
To the oceans white with foam
God bless America
My home sweet home
God bless America
My home sweet home!
HAPPY BIRTHDAY, AMERICA!!!!
The flag aboard the USS Chung-Hoon whose home port is Pearl Harbor, Hawaii. This is part of a group of pictures that were taken at Pearl Harbor when the destroyer was welcomed to its home port for the first time. 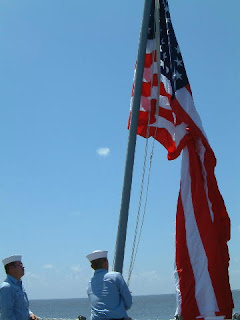 We drove down to Walnut Grove today to go to the Walnut Grove Buddhist Church's annual bazaar. This was the 56th year of the bazaar, it is held every year during the 4th of July weekend. The church is tucked away on a side street and was not very easy to find. We followed people walking in the direction of the church and found it. 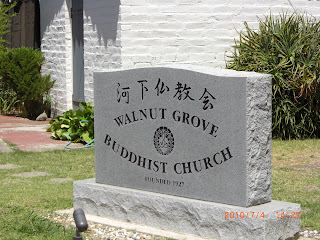 The long line of people waiting to get the food, teriyaki chicken, chow mein, inari and futomaki sushi and tsunemono were the items being offered for sale. The food was good although the teriyaki chicken from Oto's Marketplace in Sacramento is a lot better. 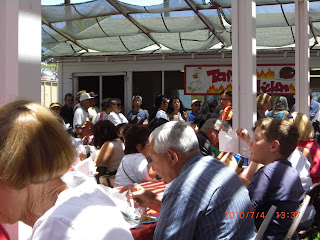 Seated next to us was a camera crew from, probably a Japanese TV station. As we got ready to leave they were interviewing a couple of elderly Japanese gentlemen. I overheard one of them say to the reporter that Walnut Grove was where a lot of the Japanese coming from Japan to the Sacramento area settled. They then moved from there to other parts of the area. All of the Japanese in the area were taken to internment camps during WWII and some returned to the area. Many of them return every year during the bazaar to reconnect with friends left behind many years ago. The Sacramento Bee did a very nice article in the paper this morning.


People enjoying the food. The overhead covering offered some relief from the sun beating down. It was very warm down there. 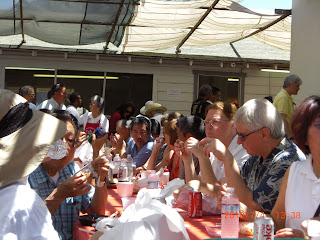 On the way back, we drove up the river on the Yolo County side into West Sacramento. We then drove over the Tower Bridge which becomes Capitol Avenue after crossing the river. Up ahead is the State Capitol. It is such a beautiful building. 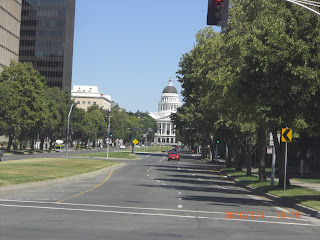 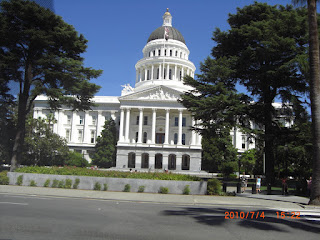 Before we came home, we stopped at Jamba Juice so I could get a Strawberry Surfrider. Gerry went over to Starbucks in the same strip mall and got a frappicino. 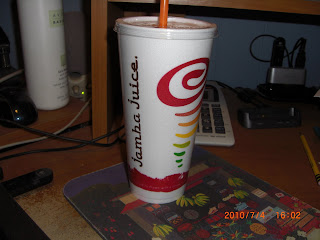 I think this is strawberries, peaches, pineapple sorbet and lemonade. Whatever is in it, I love it!! 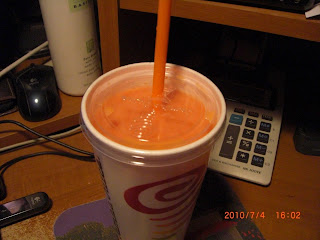 I sat at my computer for about an hour and kept falling asleep so I went and took a nap. I slept until 8:20pm. Gerry was watching the Tour de France that started yesterday. Now I am wide awake. I hope I can go to sleep later, it's 10:30 pm now. If not, I'll read until I get sleepy. I can hear fireworks going off around the neighborhood.
Hope you have had an enjoyable 4th of July.

Posted by Betty Townsend at 9:50 PM