After the birthday party yesterday and stopping at Sunrise Mall, I asked Gerry if he wanted to drive out to Loomis to Del Oro High School. The First United Methodist Church of Loomis was holding its annual Japanese Food Festival. It was being held at the high school. They have been doing it for 56 years.

Gerry dropped me off in front of the school and then went to find a parking spot. As I walked towards the cafeteria which is the flat roofed building up ahead, I saw this statue of a hawk (I think). To the left of this is a new building, probably the administration building. 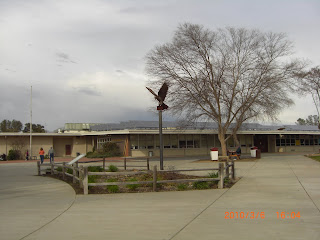 Here's a close-up. It sure is beautiful! 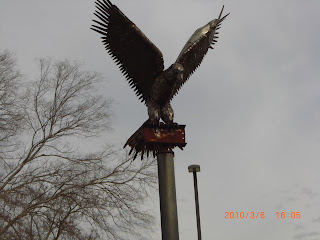 We were offered a menu of the items available for purchase. They had a dine-in menu and a take-out menu. On my plate is a skewer of beef kushiyaki, the dark meat from a half of chicken teriyaki, chow mein and bara sushi which was seasoned rice with peas and carrots in it. It was all pretty good. 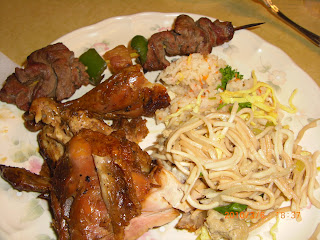 Inari sushi without the tofu skin in the shape of a musubi (rice ball). 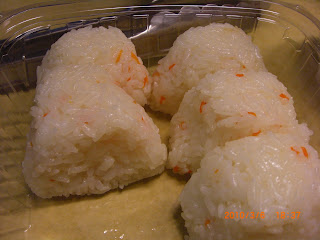 The front of the flyer. 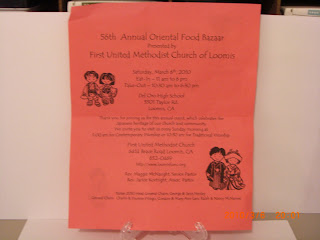 The back of the flyer with the Dinner Line Menu and the Take Out Menu. The prices were very reasonable. Gerry also got a couple of packages of cookies. 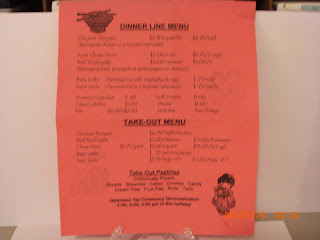 It was a lot of food for a little over $20 and very good. Gerry ate the left-overs for a snack tonight.
This church has a long history in this area. In 1903 a group of Japanese immigrants gathered together in the Loomis area for bible study and worship. They were all farmers. As they prospered, they sent for their wives and children to join them. After Pearl Harbor was attacked these Japanese immigrants were forced to leave their homes and the fruits of their hard labor and sent to internment camps. Many of the young Japanese men from the surrounding communities served in the Armed Forces and were part of the Army's famed 442 Regimental Combat Team.
The Japanese farmers returned after the war ended and continued to farm in the area. The church doors were sealed shut from 1942 to 1945. Up until 1953 the congregation was all Japanese. The congregation is now a mixture of all peoples as most churches are today. Their first English-speaking pastor came in 1957. This information was taken from the church's website.

Posted by Betty Townsend at 9:34 PM