I made some apple sauce today. I've wanted to try making some and saw this recipe on the "Eat At Home" blog. It is so easy to do. 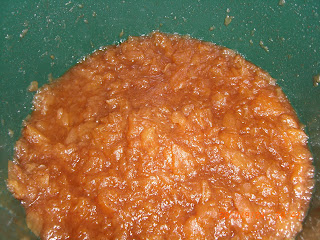 So here's the recipe:

Peel, core and slice the apples. (I cut the apples in chunks). Toss them into the slow cooker with all the other ingredients. Give it a stir, then turn the cooker to low and cook for 4 to 6 hours. (I preheated the cooker while I prepared the apples).

I cooked them for 4 hours as the apples were tender. Using a whisk, I whipped the apples a few times until the apples broke up a little, removed the insert from the cooker and set on a stove burner to cool. My stove has an electronic start so there's no open flame. After they cooled a little, I removed them to a Corning Ware casserole dish to finish cooling.

Gerry and I just had a bowl of the apple sauce. It tastes good, although I can taste the brown sugar and cinnamon. It is kind of runny too. Will have to have some tomorrow after it has set overnight in the refrigerator and see what its like. So the jury is still out as to whether I'll make it again.

For dinner, I pan fried some Red Snapper fillets that I got at Bel Air today. We stopped at Trader Joe's the other day and they had some really nice looking eggplant. We both love it so I sliced that up and pan fried that too. It was so yummy.

Tomorrow morning we are going to a breakfast buffet at a Presbyterian Church in Sacramento. The husband of a stamping friend is doing the cooking. He use to have a restaurant in Sacramento and so he is fixing all the items that were on his menu. They attend this Presbyterian church so that's why it's being held there. Evidently he has done this before and the turn-out is fantastic. I'm sure my friend and others will be helping with the cooking and serving. It starts at 8am and my friend told me people start lining up about 7:45. It ends at 11am, so it is just for 3 hours. They sell tickets for the event at $12 for adults. It should be pretty good.

Then tomorrow night we have a birthday party to go to out in Dixon. A friend of ours is celebrating his 50th birthday. We'll go to eat and be back home early. So sometime tomorrow I need to get a birthday card made...maybe I have one in my stash.
Posted by Betty Townsend at 9:01 PM