I don't know why I have such a hard time keeping my blog updated. I think about it, then when I think I have time to blog I'm too tired. I must say I do get tired of seeing the same post on my blog every time I log on. You'd think that would be motivation enough to update it. :-) I do admire my friends who update their blogs every day or at least 2 or 3 times a week. 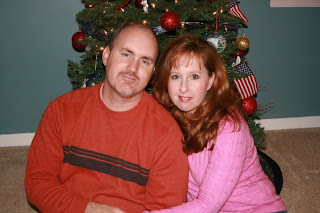 This picture of Stephen and Denise was taken at Christmas time. Today they are celebrating their 22nd anniversary. Hard to believe that much time has gone by. Their marriage is strong and they are totally committed to each other and their children. This mom is very thankful. They met in high school at the end of their sophmore years and were married a year and a half after they graduated. Stephen spent one year at BIOLA University in Southern California, came home to enroll at Sacramento State and then decided to go into the Army. They were married after he finished his basic training and AIT. They began their married life in Germany. Stephen's next duty was at Ft. Bragg in Fayetteville, NC; they lived in Fayetteville for about 13 years before they moved to Enterprise, AL where they now live. 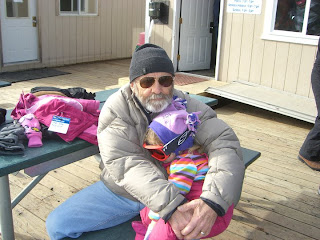 Gerry holding Emma (granddaughter) at Bogus Basin in Idaho. She got tired and after rocking her for a little bit, she went to sleep in Granddad's arms. Last Wednesday Gerry and Jason (son) left to drive to Boise/Mountain Home, Idaho to spend a week with some of the family to go skiing at Bogus Basin. This is the 11th year they've been doing this, Gerry went for the 1st time in 2005. He and Jason got back to Sacramento this past Wednesday. It sure was good to see him Wednesday night. 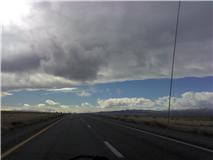 He took this picture with his phone...looking west after they left Winnemucca, NV. They had to chain up before they entered California and had chains on for 2 hours or so. It was whiteout conditions after they left Truckee and over the summit. With the chains on they couldn't go faster than 30 mph so it was slow and go. 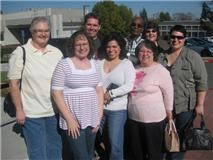 Last week Saturday I had lunch with some of the people I use to work with at the Juvenile Courthouse. L to R: Darlene, our former supervisor (she's retired now), Sherri, Monica (she resigned a week before I retired and now works for the State of California), me. In the back L to R: Mark (he also resigned, went back to school and works in SF now), Winston (also retired), Rhonda and Alena. Sherri, Rhonda and Alena still work at the courthouse.
This past Monday I had lunch with a couple of friends from the stamp group I belong to. Then we came over here and worked on projects for a while. So I kept myself busy while Gerry was gone. I do okay during the day, however, I have a rough time getting through the nights. I sleep with lights on so the house is not completely dark. I know its silly.
Posted by Betty Townsend at 8:56 PM