This morning Nathan did his first Airborne jump at Ft. Benning, GA where he is doing this part of his training. Stephen drove up to Ft. Benning yesterday after church so he could witness his son's first jump. Stephen went through his Airborne training at Ft. Benning about 17 years ago. He sent these pictures to Denise this morning and she posted them on Facebook. Evidently the soldier that is getting Nathan ready is a friend of theirs. How cool is that!! 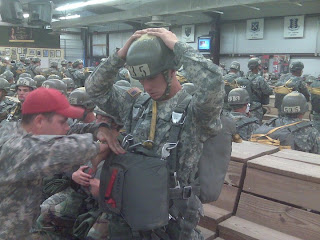 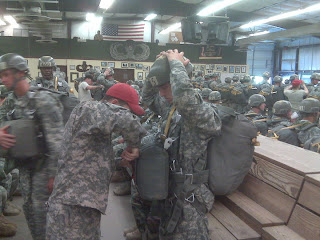 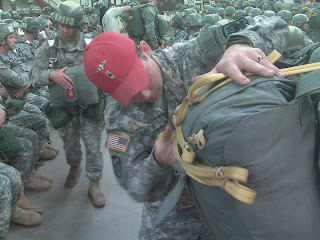 I believe Nathan is the last one on the left side of this picture. 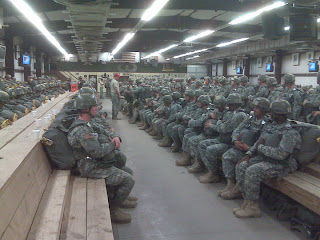 The jumps were set to start at 12 noon EDT, 0900 PDT. I'm not sure exactly when Nathan actually jumped. Denise sent me a text and posted on Facebook that all went well. She could hear Nathan's voice in the phone call from Stephen. He said he had fun! So the first jump is down.
I must say I got teary eyed looking at these pictures of him getting ready, my stomach was doing cartwheels and I was praying. And so proud of him!! Also, to see all those soldiers sitting there ready to go, I wondered what thoughts they were all having as they waited.
Nathan did his basic training at Ft. Leonard Woods in Missouri, his EMT/Combat Medic training at Ft. Sam Houston in San Antonio, TX and now Airborne training at Ft. Benning, GA. He still has his Ranger school to go to. I don't know if that is right after Airborne or at a later time. I thought I saw a comment from Stephen last night on Facebook that Nathan is hoping to be stationed at Ft. Bragg, NC. That would be "going home" as that was Stephen's last duty, Nathan grew up in Fayetteville and around Ft. Bragg. The kids lived in Fayetteville from 1992 to 2008.
Stephen was staying to have dinner with Nathan and then driving back to Enterprise tonight. He may already be on his way as it is 6:30 pm in Georgia.
I did breathe a sigh of relief when I got Denise's text that Nathan was successful in his jump, thanking God for His protection. I have no doubt Stephen and Denise were also relieved the first jump was over. Denise mentioned in a comment on Facebook that her stomach was turning over.
Posted by Betty Townsend at 2:58 PM